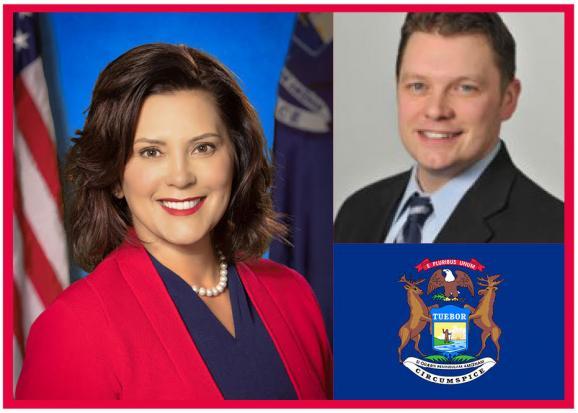 As Gov. Gretchen Whitmer prepares to deliver her first State of the State address, Northern Michigan University alumnus Mark A. Burton (’99 BS) is helping to formulate the vision for her administration and assembling the teams that will work toward achieving it. The Champion native was appointed the governor’s chief strategist in January. Burton appropriately describes his professional journey as rock climbing rather than ascending the rungs of a ladder. He has firmly grasped opportunities in front of him and nimbly shifted among different footholds in the political and advocacy landscapes.

“I’ve done a number of things inside and outside government with the goal of having a positive impact on the next generation and beyond,” Burton said. “But I’ve been very careful to engage in advocacy lobbying only for causes that I deeply believe in. That’s why I spent several years advocating on behalf of public education, which has been negatively impacted by funding cuts or legislation that diminishes its potential. That’s one side of the coin. The other is that I’m now working for a governor who wants to make up significant ground, whether it’s related to infrastructure and clean water or education and closing the skills gap created by years of disinvestment.”

After graduating from NMU, Burton earned a Juris Doctor from Michigan State University College of Law—an experience that included Oxford University’s Joint Programme in International Human Rights Law. His first job while at MSU was with then-Rep. Stephen Adamini, who later served as an NMU trustee. Burton worked for the Michigan Department of Transportation and later directed the successful 2008 statewide voter campaign that amended the Michigan Constitution to modernize stem cell research laws. He previously served as Whitmer’s chief of staff when she was Senate Democratic leader and rejoined her executive team after she won the governor’s race.

“When it’s early in a new administration, that peaceful transition of power kind of resembles a start-up company,” Burton said. “The new governor hires her own people and chooses a cabinet of directors who support the governor’s vision and represent the diversity of our wonderful state. My role is assembling the puzzle pieces for realizing her vision, not just on a day-to-day basis, but year to year and hopefully from the first term to a second term. The governor has articulated bold, long-term changes for moving the state forward. That’s all in the bailiwick of what I work on.”

Burton completed his bachelor’s degree in public administration at NMU in three years, thanks to dual-enrollment credits attained while he was a senior at Westwood High School. He fondly recalls building impactful and enduring relationships with NMU professors Brian Cherry and Steven Nelson, his adviser.

“It was a busy time for me with my credit load, but my professors made it enjoyable because they were always accessible, open and thoughtful in interacting with me as a student and watching my future unfold. That kind of mentorship and advice is what many students appreciate about Northern. I don’t know that they would have quite the same experience at other schools. I’ve been able to pursue a lot of different things off a solid foundation built at NICE Community Schools and Northern.”

Burton will give a campus presentation on the rural, suburban and urban dynamics of a number of policy issues that will be addressed in Tuesday’s State of the State. The event is scheduled from 3-4:30 p.m. Thursday, Feb. 14, in Mead Auditorium. Read more details in a related story here.