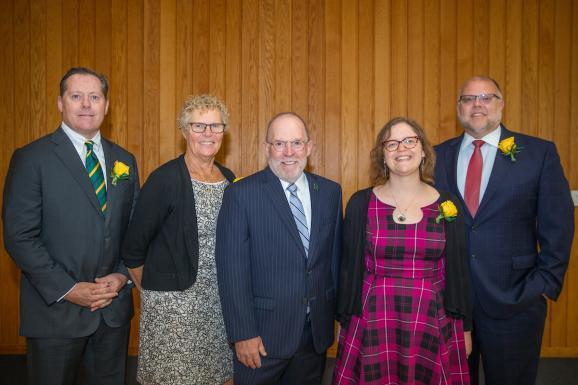 From left: Nelsen, Butler, NMU President Fritz Erickson, Millner and Schloegel. Patrick did not attend, but submitted her comments via video.

Nelsen is executive vice president, general counsel and corporate secretary for Best Buy Co., Inc. He has multi-channel accountability for worldwide legal operations and for identifying, managing and mitigating material risks to Best Buy. He is also the executive sponsor of Best Buy’s Black Employee Resource Group (BERG) and is very active in the company’s diversity and inclusion strategy and initiatives. Nelsen graduated with a degree in finance from NMU. He said playing quarterback for the Wildcats football team helped him to develop discipline, time management and a strong work ethic. Nelsen credits former coach Herb Grenke and the late mathematics professor Tom Knauss as prominent mentors.

“I discovered I won an NCAA post-graduate scholarship, which is given to 25 football players in the country across all divisions for academic and athletic performance,” said the Green Bay native. “Tom Knauss, who was also chair of NMU’s Athletic Council, completed the application for me. I wasn’t sure what I was going to do when I walked into his office, knowing my plan to be the next Bart Starr wasn’t going to work out. But I came out knowing that I would continue on with school (he earned his juris doctor from the University of Wisconsin). I owe him dearly for where I am today. I came to NMU scared and insecure, but left with a set of experiences that made me ready for what I do today.”

Schloegel, a Menominee native, retired after 25 years of service in the federal government. He graduated with a communications degree and went to work for Michigan state representatives Bart Stupak and Ken DeBeaussaert. After Stupak was elected to the U.S. House of Representatives in 1992, Schloegel became the Congressman’s district administrator and later chief of staff until 2011. From 2007-2011, he also served as an investigator and professional staff member on the House Energy & Commerce Committee’s Oversight & Investigations Subcommittee, which Stupak chaired. He closed out his career at the Export-Import Bank of the United States, initially as chief of staff, then as first vice president and vice chairman of the board and, finally, as acting president and chairman in December 2017.

“My years at Northern were the most memorable and formative of my life,” Schloegel said. “The size of the university allowed me to get involved in a lot of activities that helped me to develop skills that ultimately led to an appointment by President Obama. I was inspired from a leadership perspective by many. NMU’s leadership programs are wildly successful. There are grads across the country and around the world making significant impacts thanks to a foundation of great education and leadership training here at Northern.”

Millner graduated with a degree in metalsmithing and launched her home-based jewelry business out of the corner of her kitchen. Four years after graduating, her business was thriving and she made the transition to a brick-and-mortar location in downtown Marquette. Millner is dedicated to giving back to her community. This year, she designed custom pendants for four local non-profits and donated the sales proceeds to each organization. She also donates jewelry pieces to local fundraisers, events and silent auctions. Millner regularly gives presentations to aspiring artists, business owners and students at NMU. She also sponsors awards at NMU’s Senior Art Show and Marquette’s Art on the Rocks.

“At Northern, professor Dale Wedig made critiques fun,” said the Marinette native. “He taught me how to understand and interpret art in a way I hadn’t before. I knew I would study art and design, but I didn’t know exactly which direction I would go.  NMU let me try different studio classes and find the right path. Jewelry classes enabled me to use different skill sets and I gravitated toward that concentration.”

Butler is co-owner of Vango’s restaurant in Marquette. She has provided an invaluable training site for young people and has mentored other business owners and countless NMU students over the years. In addition to being a cornerstone of regional business, Butler is also well known as an ardent and active supporter of the Marquette community and region. She has been honored many times for her service and contributions, including receiving one of Rotary International’s highest honors, the Service Above Self Award, for demonstrating exemplary humanitarian service, with an emphasis on personal volunteer efforts and active involvement in helping others.

“This is a great honor, but I didn’t get here by myself,” said Butler at the awards ceremony. “A lot of people in the room have helped me get where I am today. I was a graduate assistant at NMU and earned my master’s degree. I particularly remember Bob Allbritten as an excellent instructor. There were others instrumental in my early endeavors and I appreciate all the help they’ve given me over the years.”

Patrick is director of the L.A. County Library, which offers services to more than 3.4 million residents in unincorporated areas and to residents of 49 of the 88 incorporated cities of L.A. County. Patrick has made it her mission to break down barriers and increase access. She continues to reinforce the library’s role in the community as a civic and cultural center, a hub for public information and services, and an institution of literacy, innovation and lifelong learning. Patrick was previously Broward County (Florida) Library’s director and held leadership roles at Queens Public Library in New York and San Francisco Public Library. She even worked for the libraries at NMU and her high school.

“I want to thank NMU for this tremendous acknowledgment,” Patrick said. “I was the first African American female to graduate with a BFA with a concentration in film. Some of my peers and I started the first LGBTQ student group at Northern. Being a person of color and openly queer at the time I was there was a challenge. I encourage the university to continue to create a community of tolerance so there’s a feeling of inclusion. I hope there’s an opportunity to make everyone feel welcomed at that magnificent campus.”