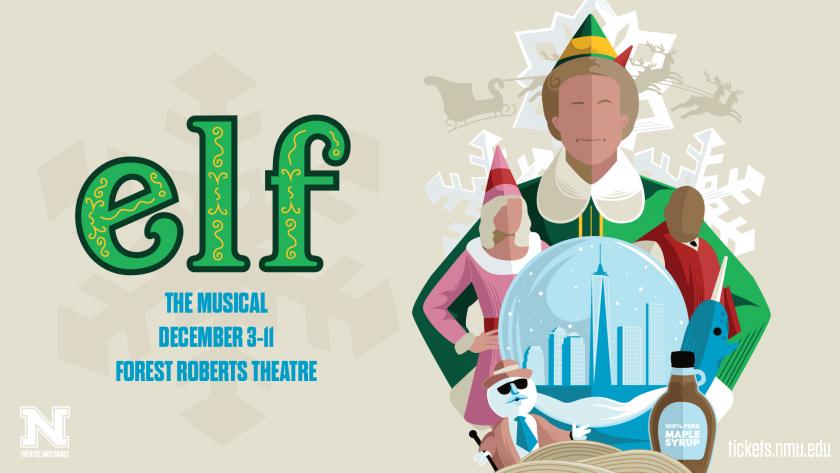 Northern Michigan University Theatre and Dance will present Elf the Musical, a comedic holiday musical based on the well-known movie. Show times in Forest Roberts Theatre are at 8 p.m. Friday-Saturday, Dec. 3-4 and Wednesday-Saturday, Dec. 8-11. A sensory friendly Theatre for All performance will be held at 2 p.m. Saturday, Dec. 4.

Hunter Foster, artistic director for the Redhouse Arts Center in Syracuse, N.Y., and a former Tony-nominated actor for his role in Little Shop of Horrors on Broadway, is directing NMU's production. He and NMU Professor Paul Truckey appeared together in Les Miserables on Broadway. They reconnected as NMU started developing its BFA program in musical theater, said Jill Grundstrom, co-director of NMU Theatre and Dance.

“It has been inspiring to have a guest director on campus who has worked so prolifically in the entertainment industry,” Grundstrom said. “It is a great opportunity for our students to work with someone of his caliber, not only because of his impressive experience and working knowledge of the industry he can share with them, but also the connections he has established. After our theatrical drought, it's been wonderful working on a show that is so full of joy.”

Elf the Musical revolves around Buddy Hobbs, who was raised as an elf after mistakenly crawling into Santa's sack of toys and being transported to the North Pole as a child. Upon discovering that he is actually a human being years later, and at Santa's prompting, he sets off to New York City to find his father. Ethan Puisto, an Ironwood native and musical theater major, portrays the lead role of Buddy.

“Initially, I felt some pressure playing such an iconic role, but Hunter has given me flexibility to pursue my interpretation so it's not a carbon copy of the movie,” Puisto said. “Buddy is an 8-year-old trapped in an adult's body. I'm trying to relay the childlike wonder he has in discovering new things in a big city. It's been great. The music is very joyful and the production will be a magical visual spectacle that is hilarious and full of slapstick humor.”

“It's been a ton of fun learning the songs, which get stuck in my mind on a regular basis, and the energetic dances that go along with them,” said Rebecca Piepszak, who plays Deb, the secretary who is assigned to look after Buddy in the Big Apple and keep him out of trouble. “Deb and Buddy have some sweet interactions. This has been a very cool experience working with Hunter, who is very knowledgeable and adamant that we get everything down just right to put on the best production possible. I'm really excited for the show; it will be a fun way to open up the holiday season.”

Tickets are $17 for the general public; $12 for NMU faculty/staff, seniors and military; $10 for students; and $5 for NMU students. They may be purchased here.

An opening night party will be held after the first performance for Dec. 3 ticket holders. It will feature complimentary food and beverages, a photo booth and a meet and greet with the cast and creative team. The opening night party is included with a ticket purchased for Dec. 3 and will follow the show in the Forest Roberts Theatre lobby.

NMU Theatre and Dance is partnering with the NMU Food Pantry for this production to gather donations in the Forest Roberts Theatre lobby throughout November and December.

This release was prepared by Kristi Evans and Jill Vermeulen.