NMU Presents 'Next to Normal' 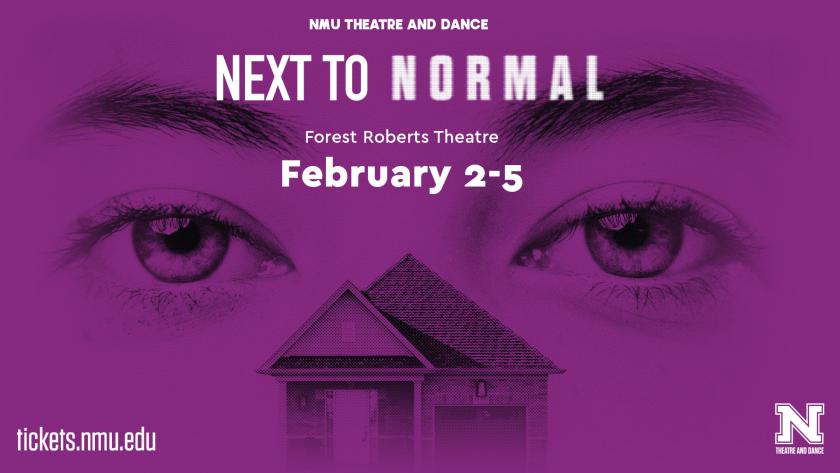 Next to Normal poster

Northern Michigan University's Theatre and Dance Department will present Next to Normal, a rock musical that offers an intimate exploration of family, loss and mental health issues. Showtimes at the Forest Roberts Theatre are at 8 p.m. Wednesday-Saturday, Feb. 2-5. A Theater For All performance is also scheduled for 2 p.m. on Feb. 5. This show is rated PG-13, with some adult language and themes that may not be suitable for younger audience members.

Next to Normal tells the story of Diana Goodman, a suburban mother who has bipolar disorder. Haunted by a ghost from her past, she tries to come to terms with her grief as her husband and daughter desperately long for a return to normalcy. Ranging from funny to intensely raw, this show was described by the New York Times as a “feel-everything” show.

"When you're working on a show that deals so prominently with mental health, you have to be really careful with how you approach the work,” said NMU student Sophie Sam, who is directing the production as her senior capstone project. “It's pivotal that you establish a healthy emotional separation between your team and the story being told. This is done in part by placing safeguards to ensure that the cast is comfortable and that their mental health isn't negatively impacted by a character they're portraying.

"Humor is a really natural coping mechanism for difficult moments in life. So, while we take telling this story really seriously, we've tried to honor the moments that have more levity. It's just part of what it's like to be alive, so it was easy for us to seek that balance."

Senior Megan Hibbard plays daughter Natalie, whom she describes as “16 and trying to be perfect, which is not going well.” Because actors in a show so intensely raw often find a lot of themselves in the roles they are playing, she said director Sam had the cast complete two worksheets: one with specific questions about their respective characters; and one with the same questions about themselves.

“This way, we could explore the depth of our roles in rehearsals, but always go back to those worksheets, see all of the differences, and remind ourselves that we are not our characters,” Hibbard said. “I hope the audiences can sense the raw emotions and hopefully feel less alone. No family is the ‘perfect loving family' and it's truly okay to not be okay. The best thing we can do is to take care of ourselves and the ones we love, whatever that looks like.”

Tickets are $17 for the general public; $12 for NMU faculty/staff, seniors and military, $10 for students, and $5 for NMU students. Tickets can be purchased at tickets.nmu.edu.