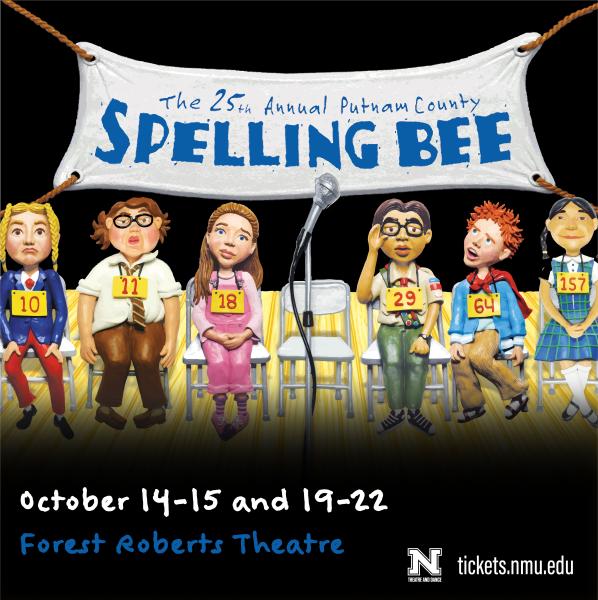 The production is about an eclectic group of six middle schoolers who are vying for the county's annual spelling championship while candidly disclosing hilarious and heartfelt stories from their home lives. As they spell their way through a series of (potentially made-up) words, they pray not to hear the soul-crushing “ding” of the bell that signals a mistake.

“It's really a group of young humans finding their own individuality and power despite the pressures put on them by different forces, whether parents, siblings, themselves or their changing bodies,” said Director Keli Crawford-Truckey. “The show was developed by an improv troupe and takes broad strokes with a spelling bee, which is perfect material for a musical.

“It's definitely a comedy first and foremost, but I always look for an element of truth or heart. The kids portrayed in the show have uncanny skills in spelling. For me to find a heartfelt connection, I went in the opposite direction of that and looked at my daughter's superpower, dyslexia. Working with the cast to bring this together has been really rewarding for me.”

In order to guide college students in portraying middle schoolers, Crawford-Truckey said she has them focus on the circumstance surrounding their characters and the lines of the script, both of which are inherently youthful. She also encourages them to explore and make broad choices while creating a space for them to move around in wacky, pre-adolescent ways.

Of the 11 cast members, seven are new to NMU and marking their debut in a campus production. Crawford-Truckey said the university's Bachelor of Fine Arts programs in musical theater, acting, and theater technology/design not only attract more students who want specialized training based on their career goals, but also enhance the quality of Northern productions.

Please note that “The 25th Annual Putnam County Spelling Bee” contains strong language and mild adult themes. It is presented through special arrangement with Music Theatre International. Tickets are $17 for the general public; $12 for NMU faculty/staff, seniors and military; $10 for students; and $5 for NMU students. They can be purchased at nmu.universitytickets.com.