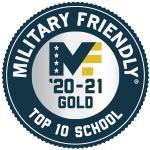 Northern Michigan University ranks 2nd among small public schools nationwide that have been designated 2020-21 Military Friendly Schools by VIQTORY Media. This is Northern's third-consecutive appearance in the Top 10 and its highest placement. NMU is the only Michigan institution in the Top 10 rankings for that category.

Mike Rutledge, a U.S. Army retiree, serves as coordinator of Student Veteran Services. He helps individuals on the NMU campus and in the community take advantage of all benefits available to them by virtue of their military service. He also is the staff adviser for the Student Veterans Association.

“The most common thing I see on the end-of-semester surveys we send out is the satisfaction with the direct attention veterans get from this office, which is staffed by veterans,” Rutledge said. “We try and make contact as soon as the veteran submits an application and then remain in direct contact through their first day and beyond, They don't feel lost or alone entering a completely different world from that of the military.”

For more information on NMU's veteran services and benefits, visit www.nmu.edu/veterans. For background on the Military Friendly rankings, visit www.militaryfriendly.com.