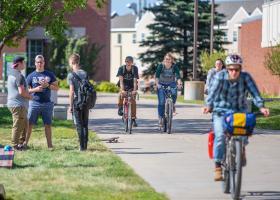 Northern Michigan University’s new student enrollment has increased 9.9 percent this fall, thanks to a second consecutive year of growth in first-time freshmen and a significant boost in transfer students. New freshmen numbers are up by 107, or 7.1 percent. Transfers have increased by 81, or nearly 20 percent, according to the university’s 10th day enrollment report.

Northern’s traditional student headcount is 7,595, down only 17 students overall because of a smaller senior class. But when combined with participants in the university’s Educational Access Network, continuing education and Middle College programs and the Public Safety Institute, the university is serving 13,374 learners overall. That compares with about 11,000 last year. The growth is attributed primarily to more than 2,000 new EAN subscribers, as Northern extends its broadband service to additional U.P. communities.

Other positive strides in the 10th day report include higher enrollment from several states beyond Michigan and an increase in student credit-hour production.