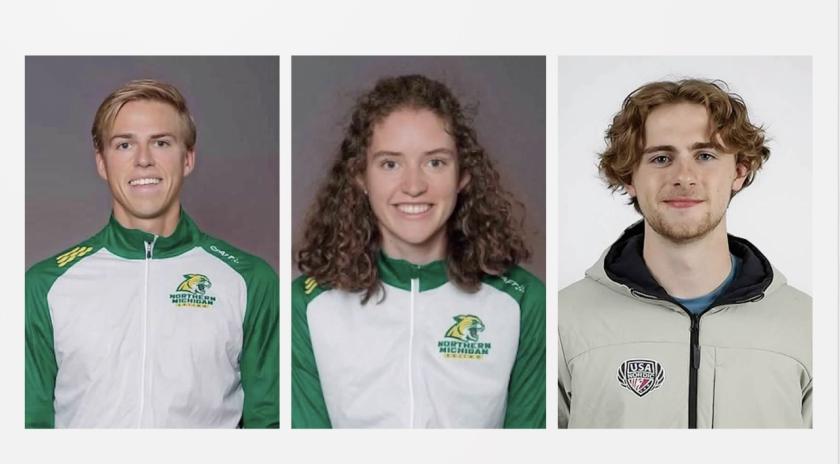 Two Northern Michigan University student-athletes, along with a recent transfer student, will represent their home countries at the 2023 FISU Winter World University Games, which opened Jan. 12 in Lake Placid, N.Y. The 11-day festival is the largest international multi-sport collegiate event. It combines high-level competition with educational and cultural activities.

Earlier this month, Karsrud was a double winner in the men's classic sprint and the freestyle sprint at the U.S. Cross Country Ski National Championships. He became the first Wildcat to win any event at the competition since 2015.

Richter was among four NMU women who placed in the top 100 in freestyle at the U.S. National Championships this month, leading the way in 22nd place. Last season, she recorded a 1st place finish in 15K freestyle at the Central Collegiate Ski Association (CCSA) Championships, and was a top-3 finisher in the 5K women's classic at the NCAA Central Region Skiing Championships.

Gundry is from Eau Claire, Wis. He began ski jumping at age 8 through the Flying Eagles Ski Club. Both he and his brother, Stewart, are on the USA Nordic Sport Men's Junior National Ski Jumping Team. Logan said he chose to transfer from Chippewa Valley Technical College to NMU because of the university's computer science program and close proximity to the Ishpeming Ski Club (ISC), where he now coaches jumpers in his free time.

“I had planned to go to Northern eventually after I attended a college fair in high school,” he said during a phone interview shortly after arriving in Lake Placid. “I walked up to Northern's table and the first thing the guy asked me was, ‘Do you like snow?' I was like, ‘Sign me up.' The computer science program is great, with smaller class sizes.

“The ISC jumps are some of my favorites. They're not the most modern, but you get lots of air and they're fun; a different experience than going to big ski-jumping complexes. I competed at my home club two weeks ago, but prior to that, I hadn't skied since September. I won't win at the World University Games, but I'm hoping for a decent result. It's a very exciting opportunity. I've always enjoyed being in international competitions. This one's a college-oriented event that won't require me to miss much school, which was appealing.”

Gundry will compete in the individual event on Jan 16, and both the mixed team and team events Jan. 18 and 20, respectively. Several cross-country skiing events are scheduled Jan. 13, 15, 17-18, 20 and 22. For more information on the 2023 Lake Placid World University Games, visit https://www.lakeplacid2023.com/.