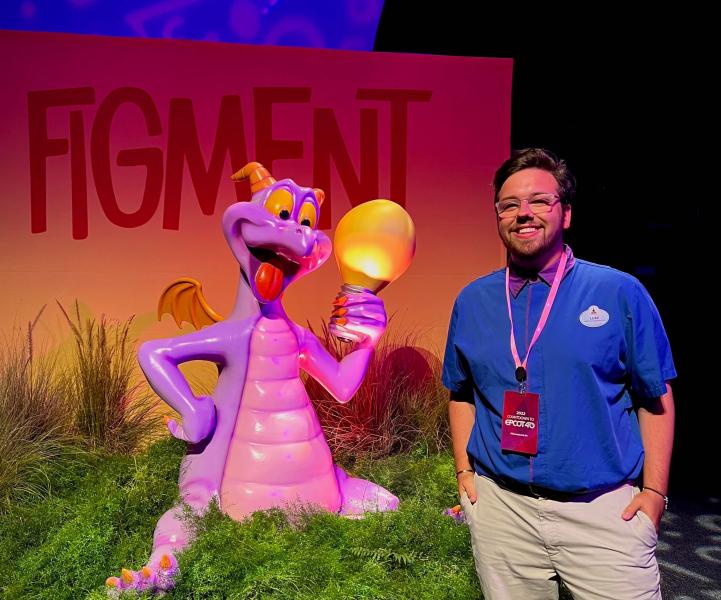 Northern Michigan University junior Luke Tschumperlin is enrolled in the Disney College program. He is working at Walt Disney World Resort in Florida until January while taking online classes at NMU. Tschumperlin is able to network with professionals throughout the Walt Disney Company, take part in learning and career development sessions, and live and work with people from around the world.

“For as long as I can remember, I wanted to work at Disney,” said the Beaver Dam, Wis. native. “I grew up going to the parks and watching all of the movies. Disney is the reason I'm studying art and design with a focus in digital media, and why hospitality systems is my minor. On all of my college visits and tours, I had always asked if they had experience with people doing the Disney College program, and whether it would be possible for me to do that. The first couple of schools that I went to said no, and then Northern's response was, ‘Yes, one hundred percent.'”

The Disney College Program is intended to build Tchumperlin's transferable skills such as teamwork, guest service and effective communication. His goal is to apply these to get a suitable job at Disney in the media production field.

“I was actually in the park where they were filming something at Hollywood Studios and I saw this one lady sort of standing there as a cast member,” Luke said. “She was able to get me a couple of untrained shifts as a media guide at Disney Springs for a media shoot. I was there getting to watch that and she walked me through who everyone was, how they do things, how these things work. I also got to talk to some of the people in the media team, which was super cool.”

Tschumperlin is also gaining experience working in an assigned front-line role. His role is “attractions,” meaning that he is in charge of getting guests seated for the rides, distributing lightning lanes and welcoming guests.

“In attractions, you're basically running the rides; you get assigned to a certain ride and everything,” he said. “I got assigned to Journey into the Imagination with Figment in Epcot. There are also opportunities to pick up work at other parts of the park, which is something that I've done as well. I picked up a Halloween party shift and got to work at the Magic Kingdom and give candy out. That was really cool. All of the little kids had costumes on and it was just really cute.”

Tschumperlin (back right) with others at the Sensory Labs
Prepared By