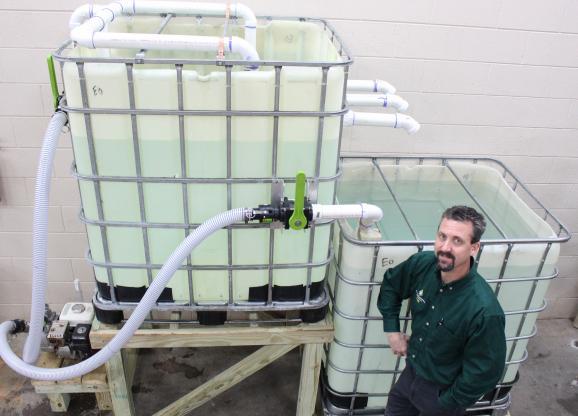 Smith and the two-tank system

Northern Michigan University grounds crews will launch a preemptive strike against snow and ice accumulation on campus walkways in an effort to enhance safety. The new method—pre-treating pavement with a liquid agent in advance of forecasted precipitation—might seem counterintuitive. But the brine solution composed of water and 23 percent salt has proven effective in thwarting the formation of ice.

Grounds Supervisor Andy Smith said there are two types of liquid controls: de-icing, which is applied after the fact; and the anti-icing pre-treatment Northern will use. He said the brine can be applied 12-48 hours in advance of a snow event, provided the pavement is relatively dry with a temperature above 15 degrees.

“Our employees’ work shifts end in the early afternoon,” Smith said. “If snowfall is expected overnight, they can pre-treat critical areas prior to leaving campus to buy some time until they can scrape the pavement when they report back to work early the next morning. The salt in the brine is the same product that’s been used on campus the last couple of years. Its properties make it less corrosive, with less impact on plants, pets and the environment.”

Grounds employees purchased materials and built the two-tank system required for the liquid anti-icing method earlier this week. Fresh water in the bottom container is pumped out and into the upper tank, where it spurts out holes dotting a vertical section of pipe to mix with and agitate the dry salt. Smith explains that the brine continues to recirculate between the two tanks, until the “sweet spot” of salinity is reached that will prevent ice from melting and refreezing.

Crews retrofitted the pickup truck used to water campus plants during the summer with a hitch-mounted boom mechanism to dispense the anti-icing solution this winter.

Smith met an Escanaba representative at a winter snow conference downstate who reported that the city has used brine with great success in recent years. An NMU group traveled there to get more information before adopting the method. He said another advocate is Price County in Wisconsin, which uses liquid exclusively on one roadway in place of rock salt.

“Liquid ice control has been in use about 15-20 years,” Smith said. “There was a lot of skepticism at first, but materials and methods have improved to the point that it’s become more effective and more widely accepted.”