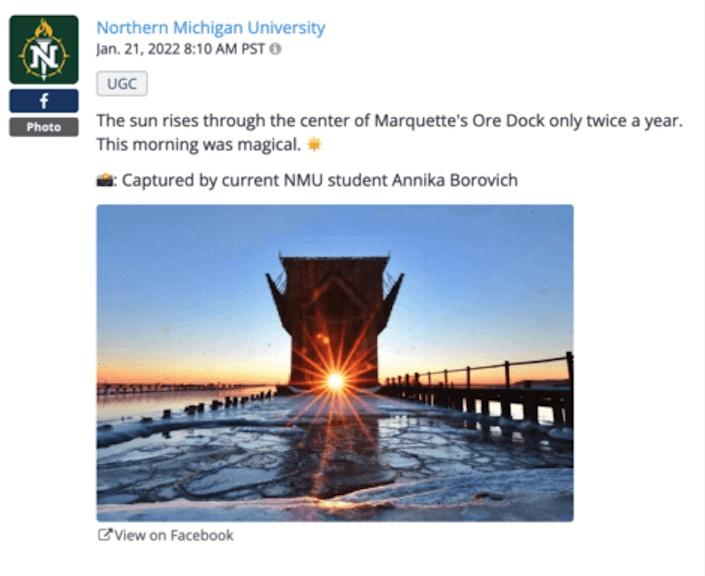 A Facebook post with a student's photo of "Orehenge," which Rival IQ called out in its summary.

Northern Michigan University ranks as the top Division 2 school in the nation in the 2022 Higher Education Social Media Engagement Report released by Rival IQ. The social media analysis company said NMU dominated D2 overall by ranking 5th on Facebook, 9th on both Instagram and Twitter and 12th on Tik Tok through “prolific posting and high-quality content.”

Of all the ways NMU gets user engagement on their posts, celebrating alumni success has been a tried-and-true strategy. For example, a post on NMU alumnus Nick Baumgartner's gold medal-winning performance at the 2022 Winter Olympics earned a 14.8% engagement rate on Instagram. That is about 4.5 times the D2 Instagram median.

Showing off the campus and surrounding area tends to earn more engagement as well. One noteworthy example was a Facebook post that featured a photo by a student of “Orehenge,” a phenomenon that happens twice a year when the sunrise is perfectly aligned so that it shines straight through the center of the Lower Harbor Ore Dock

“The post earned a 12.6% engagement rate on Facebook with more than 6,000 engagements," the Rival IQ summary stated. "More than a third of those engagements came from shares, which is one of the most labor-intensive ways a fan or follower can show love for your post, meaning a high percentage of shares indicates the content was truly resonant.”

As for Twitter, NMU was able to pull fifth place through a “secret weapon” called user-generated content (UGC). Some of NMU's most engaged-with posts on Twitter have photos submitted to them, like an image of Lake Superior under the water, netting NMU a 1.52% engagement rate on Twitter, which is about 8 times better than the median D2 college tweet.

As for TikTok, Rival IQ's summary stated, “Many D2 schools found success on TikTok this year by turning things over to current students, correctly guessing that Gen Z was their best bet for staying current on this occasionally mystifying social channel.

"NMU was no exception, and ranked 12th overall thanks to authentic and occasionally silly content, like their top video rating NMU campus spots with students participating in a popular dance trend. The video grabbed an 8.07% engagement rate by view and more than 20K views, helping NMU score big on TikTok.”

Rival IQ surveyed all 305 D2 colleges and universities on social media between June 1, 2021 and May 31, 2022.  Using the data and a weighted formula, it generated an overall engagement ranking for each school. Engagement is defined as measurable interactions.