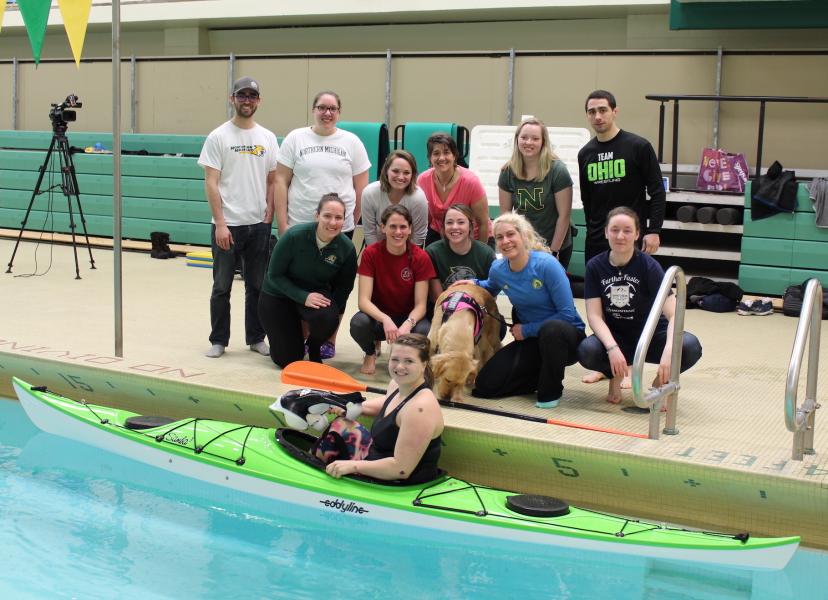 NMU School of Health and Human Performance professors Randy Jensen and Sarah Breen, along with students from the sports and exercise science programs, gave seven presentations at the recent International Conference on Biomechanics in Sports in Oxford, Ohio. The total made NMU the second-most productive university in the world at the event. Only German Sport University-Cologne recorded more presentations, with nine. Lakeland University, led by NMU alumnus Bill Ebben (MS '97), tied for third with five.

“NMU's participation at the ISBS conference has been ongoing since the 2000 meeting in Hong Kong and has resulted in nearly 100 publications in the yearly ISBS Proceedings,” Jensen said. “Over 125 students, grad and undergrad, have had authorship on these papers, with some being involved on multiple papers. I'm not sure, but it's likely this is the highest of any institution in that time. That's pretty impressive, as most other student presenters are doctoral students.”

Since 1983, ISBS has been the premier entity for disseminating applied sports biomechanics research, seeking to bridge the gap between researchers and practitioners. NMU faculty have held leadership positions within the society. Breen serves as vice president for publicatons; Jensen previuosly held the secretary general post. The conference shifts locations each year and was held on NMU's campus in 2010. NMU has also maintained the proceedings archive since 2017 through the digital Commons.

This year's presentation topics, along with the faculty and student co-authors, were:

This was part of a class project from ES 540 Advanced Mechanical Kinesiology. While the athlete wore the prosthesis, stroke rate became more symmetrical and there was a significant increase in propulsion impulse on one side, which may have been due to enhanced contact between the residual limb and kayak.

This paper was part of Ashley (VanSumeren) Hawke's thesis and found no differences in hiking shoes versus boots while stepping up and down. Thus either one could be used based on preferences.

The lead author was undergrad DuVall. Findings indicated that International Ski Federation (FIS) rankings of Nordic skiers were best predicted by muscular endurance performance tests of the upper-body and core musculature. This may be because they contribute to generation of propulsive forces in Nordic skiing.

This was part of Moore's thesis examining a laboratory test that is reliable and encompasses biomechanical challenges presented by the alpine ski boot-binding complex. The test may now be a way to mimic downhill skiing testing on snow. Coauthors Josef Kröll and Gerda Strutzenberger are from the University of Salzburg (Austria) where Moore is now pursuing her doctoral studies.

This paper by master's student Perrin was a class project from ES 511 Statistics that she expanded for the conference. Athletes from 2018 exhibited better performance in lane agility time, maximum vertical jump and three-quarter court sprint, but decreased performance in 185 lb. bench press, and displayed a reduction in weight and body fat percentage. There were no differences between years for height, standing reach, wingspan, and standing vertical jump. Combine performance has been linked to NBA performance and this study showed how players have changed over the years.

This paper was part of Fitzgerald's MS thesis and examined NFL coaches' strength and conditioning practices. It provides insight into what coaches are currently doing and how their practices have changed over 20 years. In short, they are still using many of the same techniques.

Whole body kinematics were recorded with a 10-camera motion analysis system while individuals performed five shots with a driver for maximum distance. Continuous waveform and discrete point analysis was used to explore the differences between these two techniques. The lower body swing demonstrated favorable kinematics in the majority of variables related to lower back pain and lumbar load.

For more on the School of Health and Human Performance  and its programs, click here.