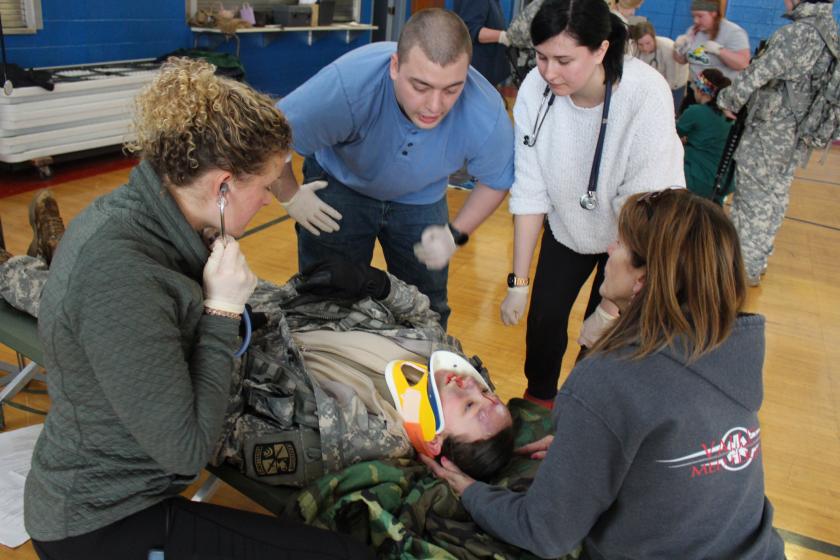 Nursing students respond to patient with a head injury.

The NMU School of Nursing typically holds trauma response simulations in a lab with mannequins. But for the first time Thursday afternoon, it collaborated with the ROTC Wildcat Battalion. The mock bomb training exercise allowed senior nursing students to interact with and deliver treatment to human patients out in the field.

“We don't always get the opportunities to respond to casualties or a bigger event like a bombing,” said senior Katja Olari of Walled Lake, Mich. “The odds that you're in that situation are very low and so it allows us to practice skills from the classroom in a safe environment, where we can make mistakes and learn from them. That way, if we are ever in real situations like this in the future, we would be more prepared with this simulation and we can be more confident when it actually matters.”

A mock bomb exploded while cadets were training in snowy conditions, as winds whipped across the intramural fields off Lincoln Avenue. Those who “suffered injuries” from the blast were transported across the street to the Armory gymnasium, where seniors in a medical surgical nursing course were waiting to help.

“It's really beneficial for the cadets to see how their actions out there can affect what happens on the medical side in here,” said Capt. Jessica Copi. “We thought that the mock bomb would pair nicely with the trauma simulation the nursing program wanted. And we need nurses, so it's a good opportunity to market ourselves as well.”

“Jessica came by during one of our simulations in the lab and started talking to a faculty member and the idea snowballed from there,” said nursing instructor Kary Jacobson. “I said, ‘Okay, let's take the trauma that we've already been doing and we'll tailor it to the bomb simulation that's going on today.' It worked out well.

“In the sim lab, we can only do so much with the mannequins. They can speak, but we can't make them say everything we want and they're not able to move. We're taking it to the next level. The ROTC cadets were informed of what their injuries were and how they would present if they had those injuries. With two-way communication between the real-life patients and nursing students, it takes it to the next level and is very helpful.”

Professor Nancy Maas said the ROTC collaboration in the field more closely mimics an emergency room. “Instead of military personnel, nurses will have EMTs bring patients into the ER and communicate their conditions. So it's more realistic than a lab simulation.”

A debriefing was scheduled after the training exercise. 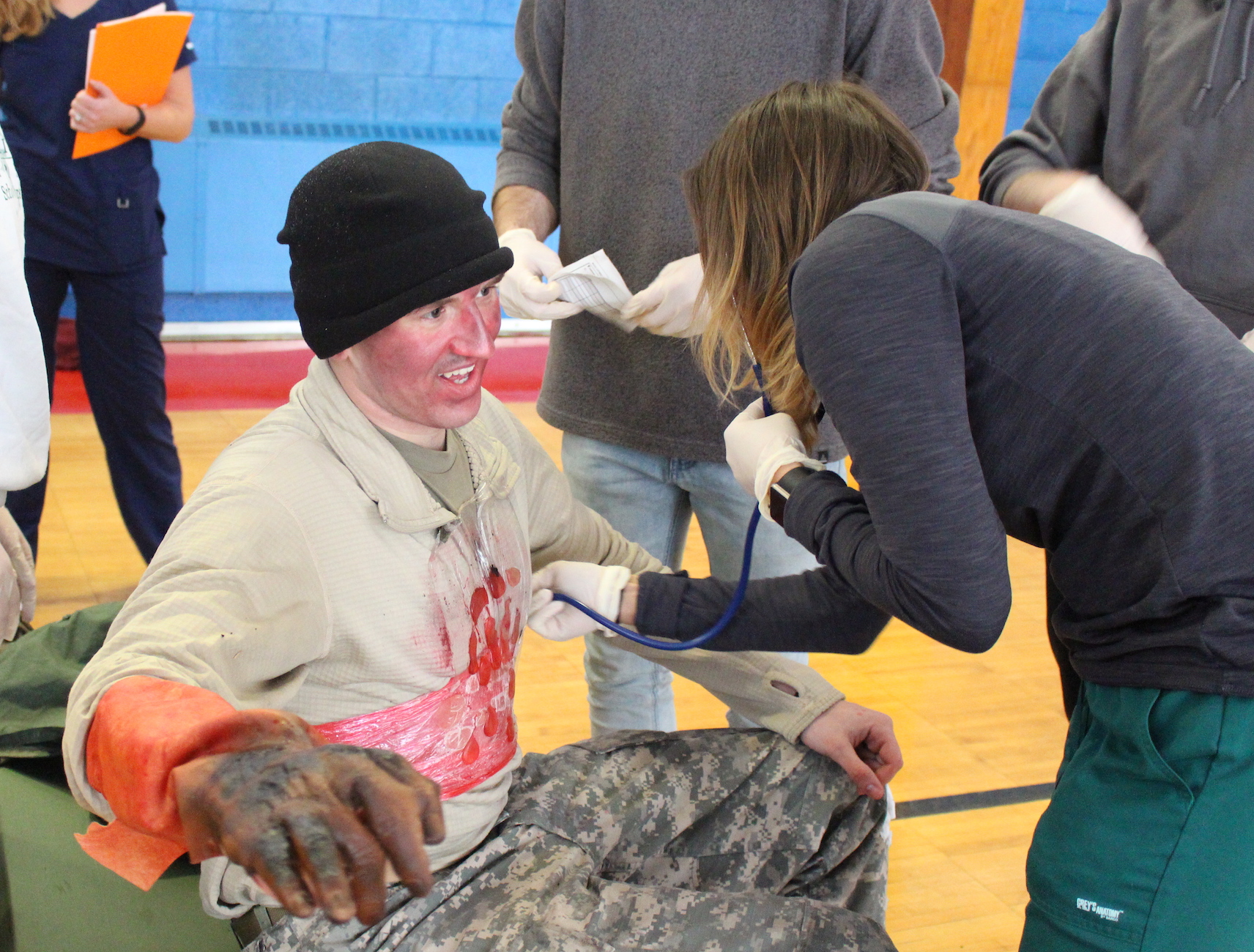 A patient with torso and other injuries receives treatment. 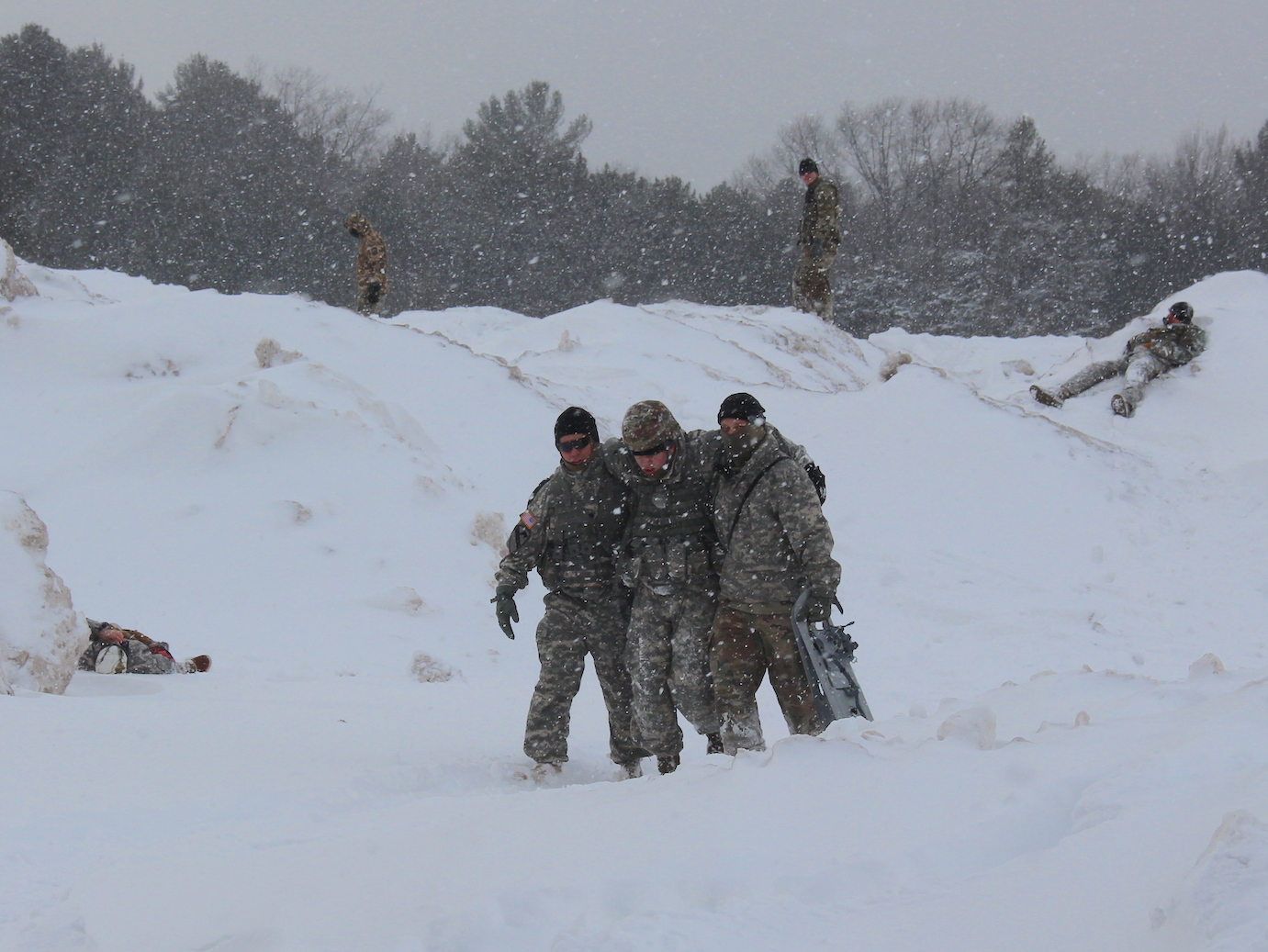 Cadets transport wounded from the field.
Prepared By