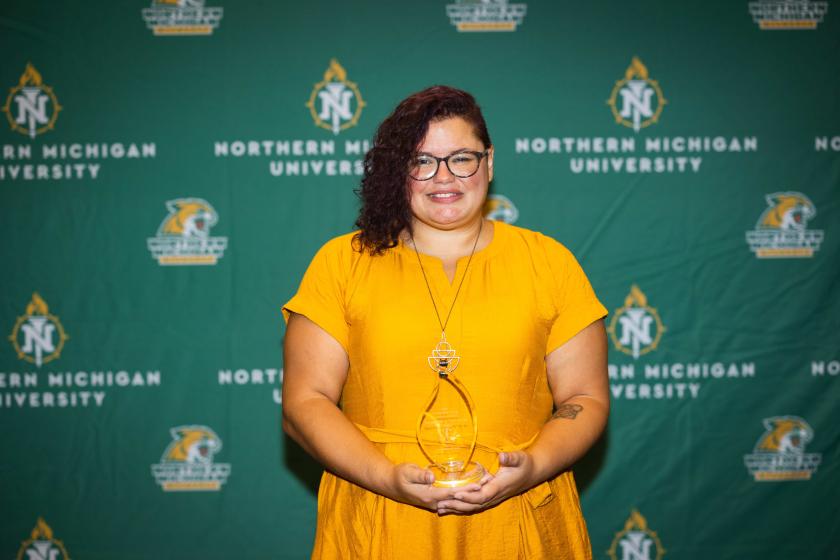 Stephanie Lay, who received her bachelor's degree in sociology from Northern Michigan in 2011, is this year's recipient of NMU's Outstanding Young Alumni Award. She provides crisis care to suicidal adolescents as a member of the behavior emergency response team at Children's Hospital Oakland in California. She also has a private therapy practice in nearby San Francisco, where she specializes in gender identity, depression, suicidal ideation and self-harm.

After graduating from Northern, Lay worked at a non-public school supporting emotionally disturbed students and found it highly rewarding. She later tried teaching art at the school for a while, but missed the emotional component, so she pursued a graduate program that would allow her to engage in more in-depth work with clients. Lay completed a master's degree in clinical psychology with an emphasis in expressive art therapy from the California Institute of Integral Studies. She practices from a trauma-informed, person-centered and narrative expressive arts therapy foundation.

“I meet clients where they are at and engage with them in supportive and artistic ways that provide different methods for expressing themselves beyond just sitting and talking,” Lay said. “Expressive arts therapy uses every modality—from poetry and painting to movement and dance. It gives clients space to explore who they are as people and to experience fully what their identity might be. Once they strengthen their sense of self, they can start figuring out goals, ideals, values and how to relate to other people.”

Lay said she started working with queer youth populations because there's so much overlap between gender identity and suicidal ideation and action. Those who aren't accepted face a higher risk of depression. She witnessed that in some environments she worked in, where queer youth were mistreated by intolerant staff members who held divergent views. Some of the students also suffered from rejection in their home environments.

“Talking about suicide in hushed tones makes people feel ashamed; it's okay to talk openly to maintain safety,” she said. “What is mentionable is manageable. And a proper response is important. If a young person expresses suicidal thoughts, you don't want to say, ‘Oh, you don't have it that bad' or ‘I have a friend who followed through on that and hurt everyone around them.' It's better to acknowledge what they're expressing and ask them to elaborate—perhaps by saying, ‘Wow, that's big; is there something more you want to say?'

“I have been managing my own mental health for long time with help from providers. There were multiple periods where I felt suicidal and had to utilize extra supports. When I was younger, there were few options for reaching out. I wished there was someone more relaxed to talk to. That's what I wanted to focus on: being the person I needed. It's rewarding to support individuals in figuring out their identities so they can develop who they are as people and build out from there.”

The name of Lay's private practice, Zombie Therapist, reflects that fact that she frequently uses metaphors as the foundation for exploring problem stories. She said zombies are an amazing pop culture metaphor for marginalized populations: “The problems and issues we have often shamble along behind us until we confront them or take action to have a life without them. We can't outrun our problems or zombies; they will eventually catch up.”

In addition to her work as a therapist and in crisis care, Lay serves on the board of directors for Bay Area Open Minds, a professional psychotherapist organization dedicated to affirming that sexual and gender diversity are natural expressions of the human experience.

The Detroit native began her career path at Northern, where she enrolled with a Michigan Promise scholarship. She said it was the only university she found that offered a sociology program that laddered from an associate to bachelor's degree. An intro to sociology class sparked Lay's interest in the field and related research. She was particularly intrigued to learn how people organize themselves in large groups. Philosophy Professor Antony Aumann helped her explore post-graduate work.

Lay said her favorite extracurricular activity was the student improv organization, which rehearsed weekly at midnight in a large lecture hall on campus and performed monthly. She described it as a fun way to establish new friendships, both within the group and with students who would attend the shows. Lay said one of the biggest supporters of the improv group, who became her best friend, was Monica Selby-Blissenbach.

“We were both sociology majors and had a few classes together, but we bonded more over improv than academics,” Lay said. “She was so in love with Northern, Marquette and the Yoop. Monica passed away a couple of years ago. She would have been most proud of me for receiving the alumni award. When I got the notification letter this spring, I was so excited, yet also devastated that I couldn't share the news with her. I think it's more important to build out your chosen family while in college than to pick a major that's a direct path to a job. Having a close network of friends at Northern has served me very well in life.”

Lay and three other alumni award winners were honored at NMU's Homecoming Sept. 23-24.