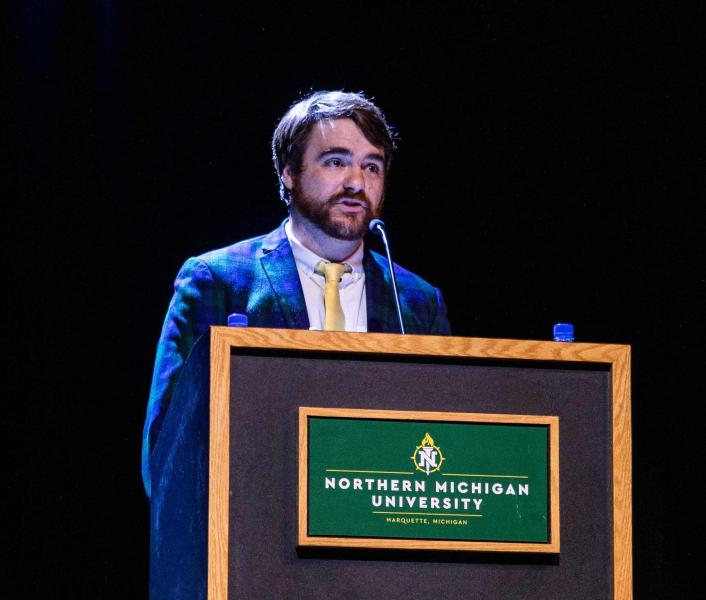 Weber at the awards ceremony.

T.J. Weber, Northern Michigan University's 2021 Outstanding Young Alumni Award recipient, is known in the fields of marketing and public policy for his research on the role political values and online misinformation have on decision-making related to vaccines, global warming and consumption. The 2011 marketing graduate was recently named the Richard & Julie Hood Endowed Professor of Marketing in the Orfalea College of Business at Cal Poly University. He is among the youngest chaired professors in the United States.

Weber's timely and relevant work has received significant national media attention. While political orientation is at the core of his research, it branches off in different directions based on real-life events or arguments with others that compel him to collect data and emphasize the practical value of the results.

In one study, he asked people to explain the process of global warming. Very few could do it and there were no political differences in terms of knowledge. Weber said it made him realize that people do not fully grasp a lot of the concepts they've formed strong opinions about.

“Liberals tend to believe in global warming even though they can't explain it based on their concerns for the environment. Conservatives tend not to believe in it because it goes against the values of industrialization, commercialism, etc., which are seen as under attack by a lot of the proposed solutions to global warming.

“We found that a 90-second cartoon from the Australian EPA explaining why we'd all die if the greenhouse gas effect didn't exist was more effective in convincing people than a video of a polar bear floating out to sea on a tiny iceberg, which is disingenuous because polar bears swim 80 miles a day. And people who watched the cartoon could still explain the process 90 days later. That made me realize it's possible to explain concepts in a way that does not provoke political values, which is probably true with vaccines as well.”

In other research conducted as a graduate student and faculty member, Weber found the following: people trust online commenters as much as doctors when it comes to vaccination belief formation; negative political ads are less effective and also easier to ignore because they're so pervasive; and consumers are more likely to respond negatively than positively to companies taking political stances.

As an MBA student and research assistant at Marquette University, Weber co-published a chapter in Persuasion Ethics, a popular graduate school textbook. He later entered the doctoral program in marketing at Washington State University, where he received awards for research and teaching. He joined the Cal Poly faculty in 2017.

Pursuing a higher education degree was not an assumed path for Weber. He was the first member of his extended family to attend college. When he enrolled at Northern, he was undecided on a major.

“I didn't know what I was doing,” he said. “My high school grades weren't good; I had worked full time my senior year because of my family's financial challenges. Northern was one of the two schools in Michigan that would have me. When I asked the adviser assigned to me what I needed to get a job, he suggested accounting or finance. I wasn't good in either of those areas, so marketing was the third choice and I settled on that.”

Despite choosing a major almost by default, Weber's curiosity and passion for the discipline were soon ignited by his NMU professors. Gary Brunswick's senior seminar and services marketing classes helped Weber look at real-life situations and gain a greater understanding of why people are compelled to do certain things—recycling, for example. Larry Pagel had high expectations related to writing, which Weber credits for helping him more effectively draft and publish his research results in academic journals. Through Gary Stark's research methods class, Weber “fell in love with running surveys and collecting data to understand consumer behavior.”

Weber was an ASNMU student government representative and became friends with the organization's president, current NMU Trustee Jason Morgan. Weber also interned for U.S. Rep. Bart Stupak and served as a member of the Cisler College of Business Dean's Advisory Council and the Academic Senate.

“I really love NMU,” he said. “It's the only place I felt a connection to. The small class sizes made it hard to hide or be distracted. It taught me how education should work, with an emphasis on addressing real-world problems and accessible, attentive professors. Many of the methods and strategies I use in my teaching now are things I learned from the Northern faculty when I was a student. NMU is a special place.”