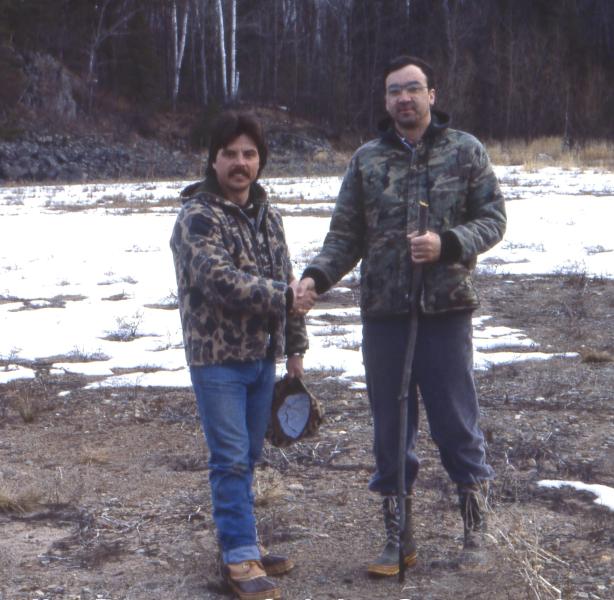 Paquette (left) and Gorto, who made the discovery while conducting an archeological survey.

Local archeologist and Northern Michigan University alumnus Jim Paquette will present “The Find of a Thousand Lifetimes,” the story of the historic 1987 discovery and subsequent excavation of one of the most celebrated archeological finds ever uncovered in the Upper Great Lakes Region. He and fellow NMU graduate John Gorto discovered a large treasure trove of 10,000-year-old Late Paleo-Indian/Early Archaic period projectile points within the drained reservoir bed of the Deer Lake Basin near Ishpeming, confirming Paquette's belief that ancient Native American peoples had once inhabited the central Marquette County area as far back as the end of the last Ice Age.

This “Northern Now” digital event, hosted by NMU Alumni Relations, will take place at 7 p.m. EST Wednesday, Jan. 18. Paquette will recount the fascinating story with many of the original photos that were taken at the time of the discovery. These include the all-important project documentation photos taken by Paquette and his father, Robert, during the subsequent excavation at the site by former NMU Professor Marla Buckmaster and the late John Anderton, a student at the time who later joined the NMU faculty, along with a team of volunteers.

“They are priceless because they seized forever, in precious solitary frames of captured time, some of the most incredible and memorable moments I have ever experienced in my lifelong search to uncover the elusive evidence of our Lake Superior region's first pioneers,” said Paquette. “I know now that what John and I discovered back in 1987—lying amidst the sand and rocks on that eroded shoreline ridge overlooking Deer Lake—was indeed the find of a thousand lifetimes. It was the landmark initial discovery of the necessary archaeological evidence that was needed to prove to the living world that early Native Peoples had blazed their first trails into the heartland of the Upper Peninsula of Michigan more than 10,000 years ago.”

Paquette graduated in 1974 and received a 2022 Alumni Achievement Award. Gorto earned a bachelor's in 1974 and a master's two years later. After the presentation,  Paquette will take participant questions live. The event is free to alumni and friends of NMU and registration is required here to receive the link to the live stream.

NMU Alumni Relations can be contacted at alumni@nmu.edu. The media contact is Kylie Bunting at 906- 227-2529, or kbunting@nmu.edu.