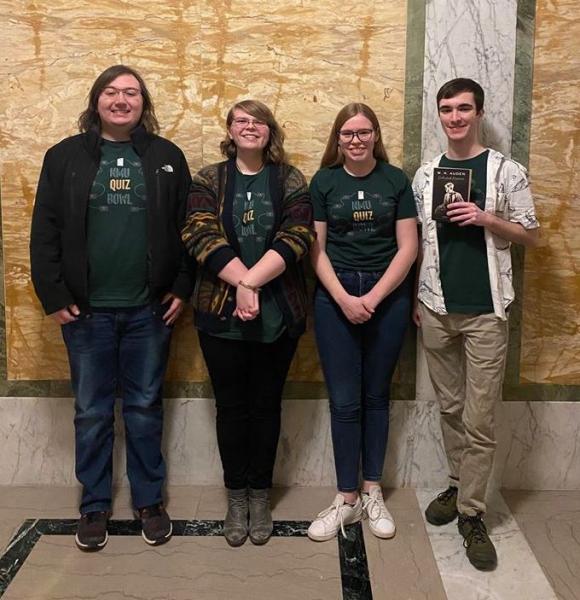 The NMU Quiz Bowl team is awaiting word on a possible return to the national championship after competing in the National Academic Quiz Tournaments (NAQT) sectional Feb. 8 in Minneapolis. Sophomore Jakob Lippert was the second-highest individual scorer among 47 players at the tourney.

Four NMU "Quiz Cats" squads participated in the competition, which features hundreds of questions spanning all academic disciplines. The NMU A team finished in third place out of the 12 squads entered, with a record of 9-2. Minnesota won the tournament with a record of 12-1,followed by Grinnell College at 11-2. The NMU team is waiting to see if it qualifies for the national championship April 3-4 in Chicago.

In placing second among individual scorers, Lippert averaged 95 points per game. NMU Quiz Bowl team faculty adviser Michael Joy described this as "roughly the equivalent of averaging 50 points per game in basketball over an 11-game series."

The NMU B team finished seventh with a record of 5-6. All told, 17 NMU
students participated in the tournament, which was the second-largest
contingent behind that of the host Minnesota Gophers.

"I'm incredibly proud of all of our players," Joy said. "We're working toward a goal of returning to the national championship tournament, and this weekend was a step in that direction. These students spend hours each week preparing for tournaments
and expanding their knowledge base about, well, everything. They're smart,
but not snooty. They are great representatives of our university."

Next up for the NMU team is a tournament focused on popular culture, to be
held Feb. 23 at Macalester College.