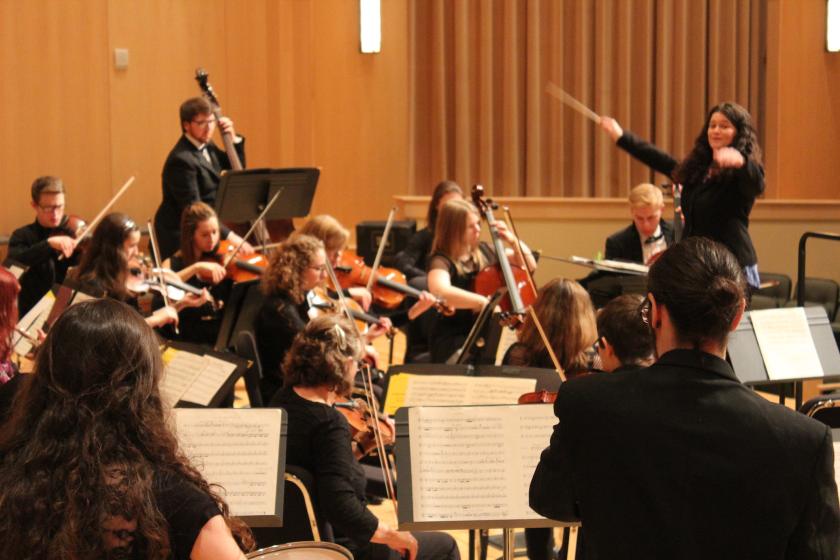 Northern Michigan University Music Professor Barbara Rhyneer was honored as arts educator of the year at the 25th annual awards ceremony recognizing individuals who have made an impact on arts and culture in Marquette. She has been teaching and conducting the symphony orchestra at NMU since 1997.

She also shares her talents with the community as associate concertmaster of the Marquette Symphony Orchestra, fiddle player and vocalist with a local folk trio, and—most recently—through occasional involvement in campus and community theater productions.

“It's nice to be recognized for a career I've had for 25 years and remain committed to doing to the best of my ability,” Rhyneer said of the award.

Her course load includes string pedagogy, conducting, and music appreciation and literature. She will add world music to the mix next semester. Rhyneer also coaches chamber ensembles and teaches individual lessons in violin—the instrument she specializes in—as well as viola and cello.

Despite her extended tenure at NMU, she said opportunities to collaborate with faculty colleagues make it easy to “keep it fresh” as an educator. For example, Rhyneer and Director of Choirs Erin Colwitz will share conducting duties when the NMU Symphony Orchestra, University Choir and Arts Chorale perform the Midwestern premiere of THE UNARMED CHILD at 3 p.m. Sunday, Oct. 16, in Reynolds Recital Hall. The nine-movement work was composed by Michael Bussewitz-Quarm, 2021 winner of the American Prize in Choral Composition, in response to gun violence against children.

When the Finnish female quartet Kardemimitt performed on campus in September, the NMU Orchestra backed up four of the group's songs. Rhyneer said it was the latest demonstration of how she and Beaumier Center Director Dan Truckey often merge Music Department events with world music performances.

During the pandemic, Rhyneer and Mark Shevy of Communications and Media Studies worked with members of both the NMU and Marquette Symphony Orchestras to make collage videos that projected a unified sound, even though they were playing separately from remote locations.

“The diverse demands of my job also prevent me from falling into any type of rut,” she said. “Every day is different, there are challenges that surface routinely and music is constantly evolving. Sometimes it's difficult to stay on top of everything, or I'm always trying to think of ways to make it better. Plus, students are so connected to media and music now that you need to constantly adapt to connect with them on the same level based on what they're listening to.

“With new students, repertoire, event planning and occasional guest artists coming through, every semester is like starting fresh. But when I really get to know students, I appreciate all of their talents. They're very easy to relate to, interested in learning the craft and altruistic—wanting to making world a better place.”

Rhyneer has extended her campus involvement to NMU Theatre & Dance productions. She co-composed the incidental music for the recent premiere of Above the Timberline by Greg Manchess. She previously portrayed Rosie in Mamma Mia!, a role that earned her the 2019 Marquette Area Theatre award for best supporting actress.

A seasoned adjudicator for the Michigan Solo and Ensemble Festival, Rhyneer is also this year's Wisconsin State Honors Orchestra conductor. She previously directed the Upper Peninsula youth orchestra for about 15 years.

Outside of her educational activities, Rhyneer enjoys performing regionally with her husband, Tim DeMarte, and NMU Beaumier Center Director Dan Truckey in the American Irish folk group, The Knockabouts. They will play at the Brits and Brews fundraising concerts which take place Nov. 11 and 12 at the Ore Dock Brewing Co. All proceeds support two local charities: JJ Packs and Music For All Kids.

The awards ceremony can be viewed here.