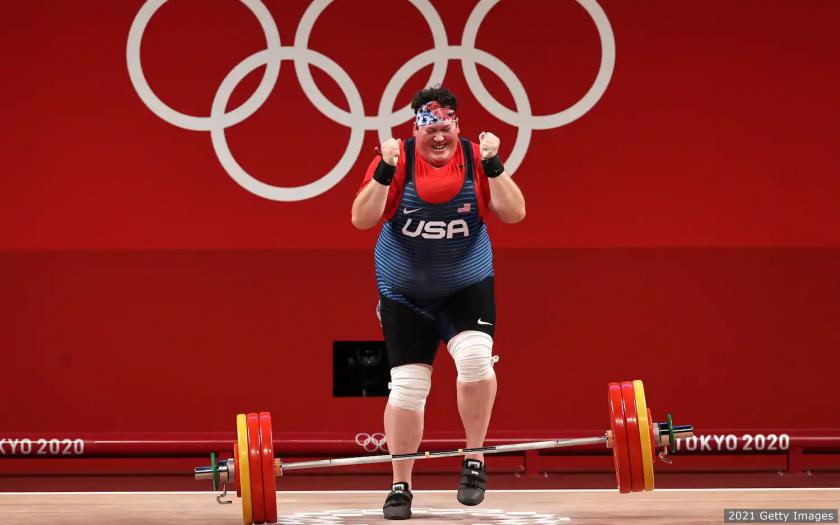 Former Northern Michigan University student Sarah Robles, who trained at what is now the NMU National Training Site on campus, became the first U.S. woman to win two Olympic weightlifting medals when she claimed bronze Monday night in Tokyo. She previously earned the same color medal at the Rio Games in 2016.

“It's a really big deal,” said Robles in a Team USA story. “I've struggled a lot throughout my career, it almost feels like I've been going uphill both ways with the wind against me. Going from the bottom in the sport, to the top in the sport, to making history in this sport means a lot to me.”

Competing in the Tokyo International Forum in the women's +87kg, Robles went three-for-three in the Snatch. Her final lift of 128kg tied the American record set by Olympic medalist Cheryl Haworth in 2003.

Robles lifted 154kg on her second Clean and Jerk attempt. Her total of 282kg sealed the Olympic bronze. That medal was the first by an American in the sport in 16 years.

Robles also made history the year after Rio, by sweeping the Snatch, Clean and Jerk and total medals at the 2017 IWF World Championships, becoming the first U.S. world champion in the sport in 23 years.

China's Li Wenwen won the gold in Tokyo with an Olympic record total of 320kg, followed by Great Britain's Emily Campbell's 283kg (just one kilogram ahead of Robles).

“This past quad and even further back than that, we've had a complete overhaul of our leadership and policies. The programs that have been implemented for quality of lifting, mental health, funding for the athletes is all stuff that never existed before,” Robles said of organizational changes at USA Weightlifting. “It's for the better, we'll continue to improve. The improvement has to come from the athletes, you invest in us and we'll show you that your investment is worthwhile. That reciprocity will continue.”

In addition to being the first U.S. woman to win two Olympic medals in the sport, she is the first American to win multiple Olympic weightlifting medals in 57 years. In 1964, when the Games were last held in Tokyo, Isaac Berger won his third medal and Norb Schemansky his fourth.

“I hope I'm the first of many American women to be able to medal at consecutive Olympics,” Robles said.

Robles is just the second U.S. woman to compete at three Olympic Games. Only Schemansky has more Olympic appearances among U.S. weightlifters.

“You just have to try,” Robles said of what she'd tell young girls with her body type. “Open your mind and don't try to fit into boxes. Don't listen to the people who say you can't do something until you try it.”

This is also the first time the U.S. has medaled in weightlifting at consecutive Olympic Games in 53 years (1964, 1968).