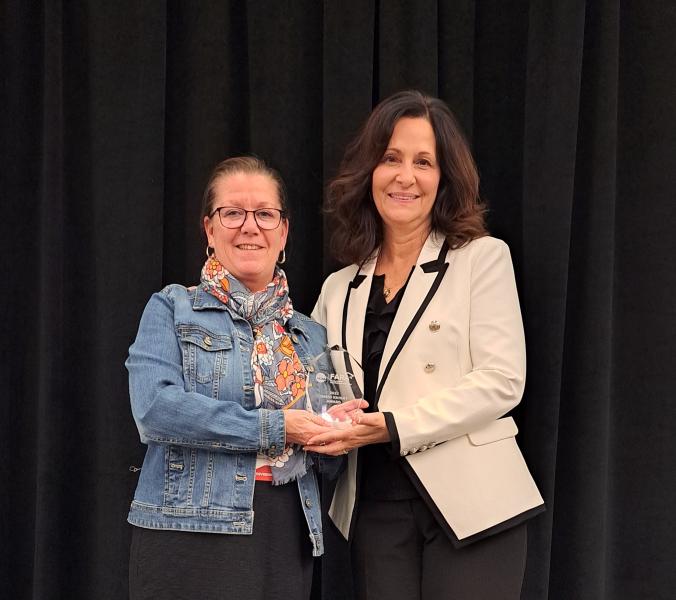 Rochester (left) with Jeri Beggs, FAR at Illinois State, who presented the award.

“It was a surprise presentation; totally unexpected and an honor,” Rochester said. “FARA was established years ago when the NCAA made it mandatory for all institutions to have a faculty rep, but didn't offer guidance on what their functions should be. FARA was intended to give faculty reps a voice and help them figure out their role as part of the mandatory leadership team. It has become more organized over the years. The executive committee organizes an annual symposium with programming and also works to develop resources for those who serve in that position at their campuses.”

In 2006-2007, Rochester was appointed as NMU's faculty athletics representative and chair of the NMU Athletic Council. She had to relinquish the FAR role earlier this year when she accepted a new assignment as senior athletics adviser.

“Faculty reps are supposed to be independent of athletics, so they had to find someone else to take my place for the year,” Rochester said. “Carol Johnson from Business is filling that role for now. The best part of my new position has been connecting with the student athletes and being a resource for them. I provide general oversight of athletics and focus on academics, student well-being and safety, and institutional control.”

Rochester was elected as a Division II representative to the NCAA Faculty Athletics Representative Association (FARA), and later served the association in high leadership as president-elect, president and past-president.

For the past five years, she served as a member of the NCAA Division II Management Council, with liaison and subcommittee roles for the NCAA Committee on Competitive Safeguards and Medical Aspects of Sport (CSMAS), and NCAA Faculty Athletics Representatives Association. She also currently serves on the NCAA Drug Test Appeals Committee.

An NMU alumna, Rochester earned a master's degree in exercise science in 1995. She also holds a doctorate in educational leadership from the University of Phoenix in 2009.

The NCAA FARA award honors David Knight, longtime faculty athletics representative at the University of North Carolina at Greensboro, and a driving force behind the establishment of FARA.