Sherman is NMU Student Veteran of the Year 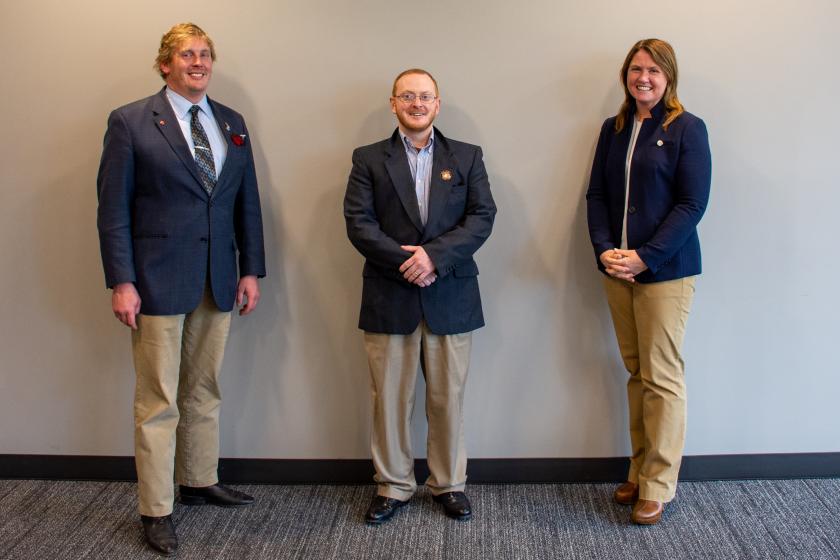 Sherman (center) with McBroom and Cambensy

Jesse Sherman is Northern Michigan University's 2020 Student Veteran of the Year. He received a ceremonial coin at a small campus event held on Veterans Day and attended by his family, along with Michigan Rep. Sara Cambensy and Sen. Ed McBroom. Sherman is scheduled to graduate in late November with a master of business administration (MBA) degree.

“I am deeply honored to receive this award,” Sherman said. “My experience at NMU has been a fulfilling one. The opportunities I've had here have broadened my education, expanded my network of friends and associates, and given me a greater sense of purpose. This is truly one of my proudest moments.”

“Jesse was selected because of his academic success and his participation in university and community veterans' organizations and activities,” said Mike Rutledge, coordinator of student veteran services at NMU. “He has also been active with the Student Veterans of America chapter at Northern.

Sherman serves as the secretary of the Region 1 Veterans Community Action Team and is a member of its education subcommittee. He also is the principle researcher and writer for veterans' issues on the Rural Insights website, a research and information source for Michigan's Upper Peninsula and beyond.

Born in Alpena and raised on an apple farm in Hubbard Lake, Sherman graduated from Rapid River High School in 2002 and joined the U.S. Marine Corps as an infantryman. He served two combat deployments in support of Operation Iraqi Freedom in 2004, the same year he earned the Purple Heart Award, and in 2005-06. He was discharged at the rank of sergeant.

Prior to attending NMU, Sherman earned a bachelor's degree in English-practical writing from Western Michigan University and a certificate in advanced brewing theory from Siebel Institute of Technology. He and his wife, Liz, have three children: Jackson, Mallory and Oliver.

Sherman is the fourth recipient of NMU's Student Veteran of the Year award since the program was established.

Rutledge said NMU Telecom will also be honored with a coin Nov. 18 for routinely seeking out student veterans for on-campus employment opportunities based on their dependability and maturity.