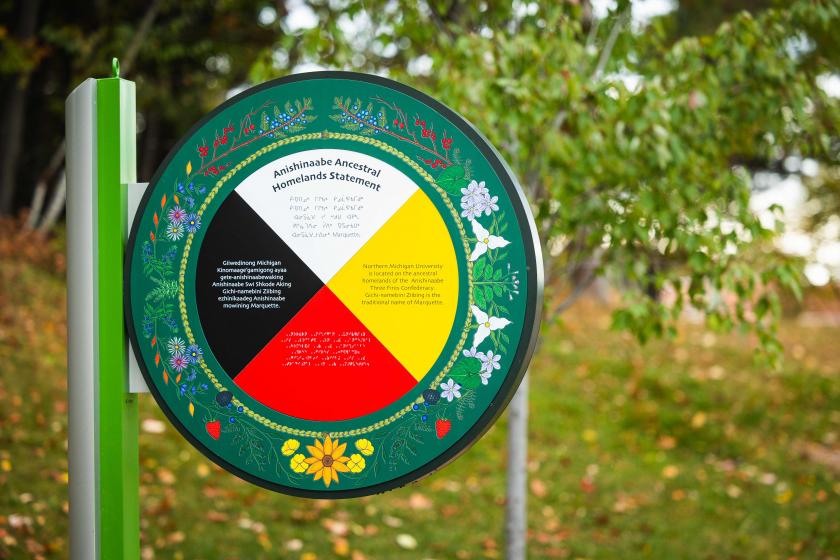 Northern Michigan University honored Indigenous Peoples' Day Oct. 11 with an unveiling ceremony for a new sign on the academic mall acknowledging that the campus is located on the ancestral homelands of the Anishinaabe Three Fires Confederacy. The event included songs by the Morning Thunder Drum, speakers and a group procession to the Center for Native American Studies' fire site near Whitman Hall.

The Native American Student Association selected “A Day of Healing and Celebration” as the theme of this year's event. NASA President Bazile Panek said it falls in the midst of the continuing pandemic, as “American Indians and Alaska Natives are dying of COVID-19 at much higher rates and at younger ages than any other group.”

Grace Challier, a Center for Native American Studies faculty member, has taught a course on the history of Indian boarding schools for the past 14 years. She read a relevant short essay titled “In Defiance” by NMU student Shelby Boggs, a double major in Native American studies and social work.

“The United States has committed 500 years of genocide against the Indigenous people of Turtle Island in an attempt to further the capitalization of the land,” Boggs wrote. “The most insidious act of genocide was that of the Indian boarding school system, which operated for nearly 100 years through both governmental and church oversight. The main advantage for the dominant society to operate these institutions was gaining control over Indigenous people through systematic dehumanization and traumatization. Nevertheless, in spite of 500 years of genocide and forced assimilation, Indigenous people and culture prevail.”

Professor Martin Reinhardt of the Center for Native American Studies read comments from NMU Interim President Kerri Schuiling, who was unable to attend because of a flight cancellation.

“In spite of the atrocities Indigenous peoples suffered and endured, it is our Native American communities that have consistently taught us the importance of leaving the world in a better place than we found it,” Schuiling wrote. “Getting to today has been a journey that has taken a lot of time, patience and work on behalf of many people.”

“One thing I was told right off the bat was that a sign was not enough because that in itself was a sign of colonization; we needed something more lasting and meaningful,” Truckey said. “In addition to the sign, there is going to be an interpretive walk in this forest area directly behind it. This is the remnant of a forest that once stretched throughout this whole area. We thought, how fitting would it be for this forest to have a new life, where it actually serves as an interpretation of the Anishinaabe people and the things they value in their lives. For that reason, we chose this location for the sign as an entryway into the forest and trail."

NMU student Reese Carter, an illustration and Native American studies major, designed the multi-language sign that reads “Northern Michigan University is located on the ancestral homelands of the Anishinaabe Three Fires Confederacy. Gichi-namebini Ziibing is the traditional name of Marquette.”