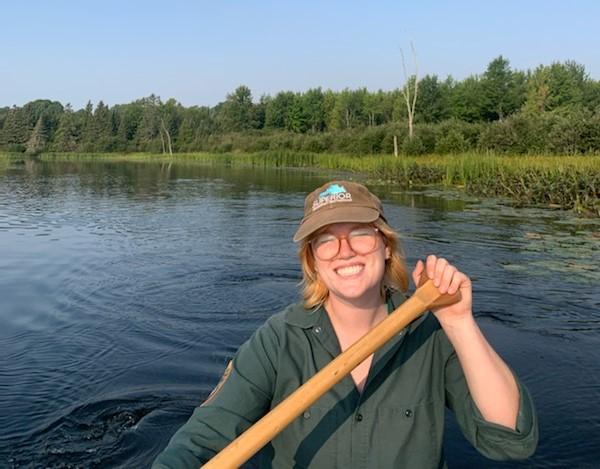 NMU alumna Caitlin Sternberg, who earned her environmental science degree in 2021, is the new director of outreach and communication for Citizens for a Safe & Clean Lake Superior, a Marquette County nonprofit. She previously worked as a Great Lakes Climate Corp crew leader with the Superior Watershed Partnership, partnering with diverse groups like the National Forest Service or the Keweenaw Bay Indian Community on environmental projects.

Sternberg also was employed as a land steward with the Rocky Mountain Conservancy in Colorado.

“Cait has the experience, talent, youthful energy and vision to help us raise awareness and unite our community to defeat the proposed heavy industrial rocket launch site near Lake Superior's shoreline at Granot Loma,” said CSCLS President Dennis Ferraro in a statement.

After growing up in a Chicago neighborhood where jets from O'Hare airport boomed overhead, Sternberg says that “living near Lake Superior has reframed my world views and values.” In addition to the strong connection that she feels to the lake and surrounding habitat, she is “also impressed by the connection people in Marquette County have to each other, and to the environment,” she said in an announcement.

In addition to engaging people at community events, developing ties with community members, and involving volunteers to help with CSCLS' mission, she hopes to also expand participation of local university and high school students, whom she sees as “very environmentally oriented,” she said.

According to its website, CSCLS' mission is three-fold: to protect and improve the coastal habitat, shoreline and fresh water of Lake Superior and its watershed in Marquette County; to oppose individual, corporate or governmental action that may jeopardize that resource; and to encourage community action to preserve the quality of life provided by this Lake Superior coastline environment for generations to come.