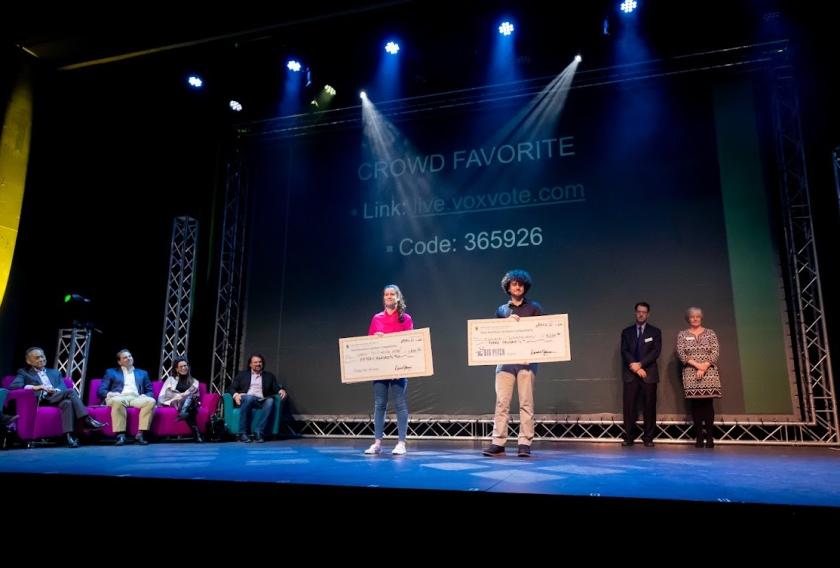 DeNoya and McKaba vying for Crowd Favorite at the competition

Four student finalists recently presented their entrepreneurial ideas at the NMU College of Business' Big Pitch event, the culminating activity in the annual new business venture competition. Donald McKaba earned $3,000 for winning the Big Pitch with Wasteless, his plan for an “innovative shopping experience” that aims to reduce one-use containers that end up in landfills. Grace DeNoya won $5,000 for best business plan for You'd Never Know, a 100% gluten-free bakery, and $1,500 each for best trade fair display and crowd favorite.

McCabe's Wasteless involves using rented and reusable containers to buy certain grocery items in bulk at a lower cost than in regular stores. This provides opportunities for savings because there would be no individual packaging costs.

DeNoya said You'd Never Know would start with in-home baking, utilizing e-commerce and farmers markets, then move to a bricks-and-mortar location to sell the baked goods. She explained that many gluten-free products are not of the same quality as their gluten-filled counterparts, and “leave something to be desired.”

The other finalists who competed were Jim Callhan and Patrick Gutierrez. Callahan, who grew up a competitive golfer, presented his idea of JC Indoor Golf, a golf simulator for those who want to get indoor practice during the harsh winters and see improvements in their golf game throughout the year.

Gutierrez presented Ixchel, a Mayan-themed boutique gym that featured a cannabinoid supplement, THCV, to promote weight loss while not producing any intoxicating effects. The gym would also serve as a social setting for those who use it, because the supplement would have to be administered 30-minutes prior to the workouts. Gutierrez said it would target the Latina community, stating that demographic is proportionately more obese.

“You are among a very kind of unique group,” College of Business Dean Carol Johnson told the finalists, who were selected from 40 initial entrants.

A Mini Pitch competition, hosted by Invent@NMU, took place before the Big Pitch. Several groups presented ideas for one of two $500 cash prizes. Josh Lewandowski was one of two winners with his idea of taking two-dimensional images and printing them as correct 3D models.

Henry Westlind and Cooper Lennox won the other prize for their company, VirsaQuest, and its Vision product. Vision is a concept for a paddleboard that includes a lowered, clear bottom to see the water underneath and a small, detachable motor that can be used as a swim aid.

For more information on the Pitch Competition, visit news.nmu.edu/students-present-ideas-annual-new-business