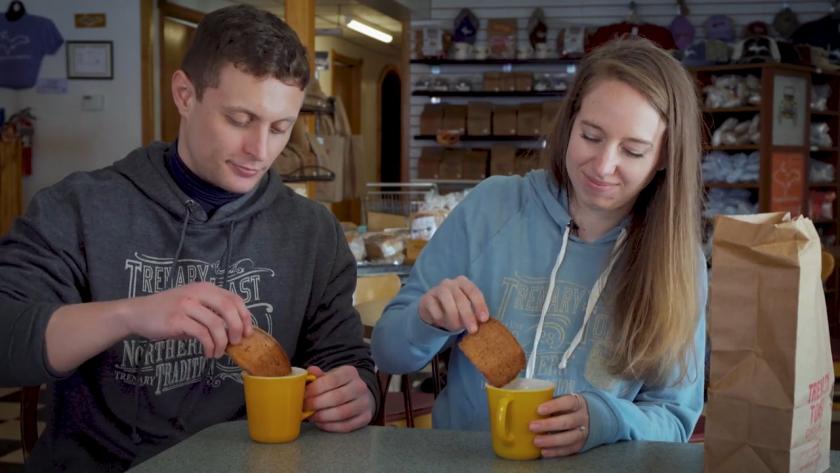 Since COVID-19 escalated in mid-March, NMU alumni and Trenary Home Bakery co-owners Brianna Wynsma ('15) and Marco Dossena ('17) have been donating fresh bread, Trenary Toast and other items to food pantries in Marquette and Gwinn. The NMU Food Pantry is one of their regular delivery stops.

When Gov. Gretchen Whitmer's “Stay Home, Stay Safe” order was announced, the couple reached out to NMU to see if there was a place where they could donate product and make a meaningful difference. That is when they first learned about the NMU Food Pantry.

“We were students not too long ago,” Wynsma said. “We remember how hard it was to balance life as a student when we weren't facing a global pandemic. We can't imagine still studying, going to class and taking finals, all while potentially losing your job or source of income. We feel a real connection to NMU and want to support the NMU community in whatever way we can, and the way our bakery can help is by providing staple items that hopefully provide some comfort to those in need.”

Wynsma said the bakery has had quite a bit of fresh bread to donate. She and Dossena wanted to spread it around to different pantries to ensure their products reach different groups of people in the area.

“We have been making donations [to the NMU Food Pantry] twice a week since mid-March,” she said. “We usually try to donate a tray or two of freshly baked bread per week—typically rye bread, raisin bread or cinnamon bread. We have also donated large bags of Trenary Toast, when available. We plan to continue donating as long as people are in need.”

Wynsma and Dossena were engaged when they and Dossena's mother, Nucci Cerioli, assumed ownership of the legendary U.P. company in early 2019. The couple is now married.

“We've always loved Trenary Toast,” Dossena told Word on the Street's Brian Cabell shortly after the sale. “We eat it for breakfast. And we know what the company means to the U.P. That's why we bought it, and it gives us a chance to stay in the U.P. and grow roots here.”

According to its website, Trenary Home Bakery was established in 1928 by Jorma Syrannen. Her twice-baked Finnish coffee bread, which became known as Trenary Toast, is now available in several flavors and can be shipped. All bakery items are produced and packed by hand in the Trenary production facility. For more information, visit trenaryhomebakery.com. 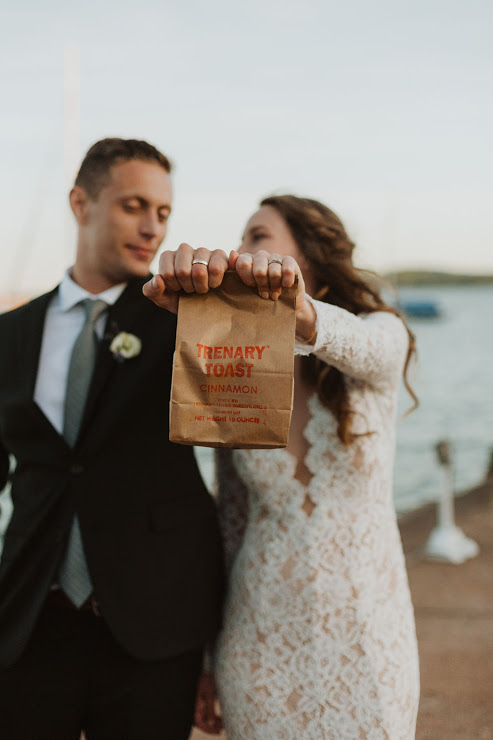 The newlyweds with a symbol of their love and unity (besides the rings): a bag of Trenary Toast.
Prepared By