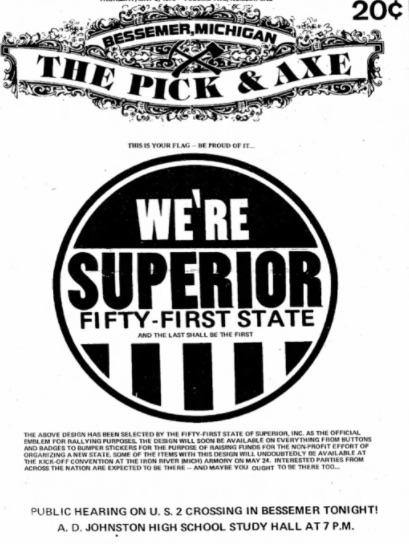 When modern environmentalism posed an economic threat to extractive industries such as mining and timber, there was a movement in the Upper Peninsula to sever political ties with lower Michigan and form a new state. Dan Truckey, director of NMU's Beaumier U.P. Heritage Center, is featured in a news article about this divisive period in the 1970s.

The article on the Spartan Newsroom site at Michigan State University focuses on a soon-to-be published study by historian Camden Burd titled “A New ‘State of Superior': Political Fracture and Anti-Environmentalism in the Upper Midwest.” Truckey is also quoted because the Beaumier Center's current exhibition, "The 51st State?" also addresses the breakaway effort.

Because the Beaumier Center has been closed to visitors by COVID-19, an online version of the exhibition is available here.