NMU Trustee Greg Seppanen has a penchant for planning and for preserving the environment—two elements that he said should frequently intersect. The NMU alumnus and retired teacher has served more than 40 years on planning commissions, and as a member of the Marquette County Climate Adaptation Task Force and other environmental organizations, to achieve his long-term goal of leaving the community in a better position than it is now. Seppanen said there is an opportunity for his alma mater to play a critical role in addressing climate change at the local level.

“NMU has tremendous resources and potential to help in leadership and education as we confront something that is going to hit the world hard and be very disruptive,” Seppanen said. “Climate change is coming, and NMU can be a leader in supporting local government collaboration to strategize an effective response to the challenge, similar to what's taking place now with the university's role in addressing rural health issues.

"If everyone works together without turf battles that can destroy the harmony, the community and university will come out better and stronger. That's where the Climate Adaptation Task Force came from eight years ago when it was founded by a number of community leaders and NMU representatives.”

Seppanen's foray into planning and local politics can be traced to a U.S. Department of Energy proposal that was looking to establish the country's permanent high-level nuclear waste repository at an area underground mine. As a board member of the U.P. Environmental Coalition, he worked to educate citizens and encourage their opposition. It was at one of those meetings that he met Carol Henry, his future wife.

He also gained a seat on the Marquette County Planning Commission, recognizing that is the first step in the approval process for such projects. He served on the commission with former NMU geography professor Pat Farrell, who mentored him in effective planning.

From there, Seppanen was elected to the Marquette County Board of Commissioners, which he served for 18 years, then to the Chocolay Township Board for nine years while teaching full time for Marquette Area Public Schools.

Seppanen's community service was preceded by military service. He joined the Army while attending Lake Superior State University. He was put into the infantry and scheduled to leave for Vietnam when he was selected to serve in the U.S. Presidential Honor Guard in the Washington, D.C. area.

Traditionally known as "The Old Guard," the 3rd U.S. Infantry was established in 1784. It serves as the Army's official ceremonial unit and escort to the president, provides security in D.C. for national emergencies or civil disturbances, and conducts memorial affairs to honor fallen comrades. Most people recognize “The Old Guard” for its sentinel duties at the Tomb of the Unknown Soldier.

“Vietnam was going full tilt and we were burying many casualties of the war in Arlington National Cemetery,” Seppanen recalled. “Watergate was just getting started and there were large anti-war demonstrations. Overall, it was an unbelievable experience for a small-town boy from the U.P. We needed White House security clearance to carry out our duties because we were up close to the president and a lot of world leaders. I was then also selected to be my company's clerk, like the role Radar O'Reilly had on the M*A*S*H TV show.”

With support from the GI Bill and NMU's “phenomenal” services for student veterans, Seppanen became the first college graduate in his immediate family. He completed a bachelor's degree in history and geography in 1979. He also trained in welding at the former NMU Skill Center, which preceded the Jacobetti complex. Seppanen went on to be a teacher and counselor at the Bi-County Alternative High School for seven years.

“I started at the alternative high school when it was located at the church across from the Landmark. At that time, it was an at-risk school. The staff was small, but amazing, and worked really well as a team. The class sizes were small and we were able to devote a lot of time to the individual needs of students. It was a fantastic job and I was honored to be part of the team that principal Howard Tamminen put together to work with these young adults.”

Seppanen transferred to Marquette Senior High School, where he taught U.S. and world history, government and economics for the remainder of his career. When he retired from teaching in 2010, he built a woodshop. He enjoys spending time there while Carol is weaving on one of three looms in her studio above his wood shop. The couple adopted a rescue dog—a chocolate lab named Maddie—and they've had up to five cats at one time. Greg also has a lifelong passion for pike fish.

He has been cutting back on some of his community service, but Seppanen remains involved in the labor movement in Marquette. He has served on the U.P. Labor Hall of Fame committee.

“In 1993, the U.P. Labor Hall of Fame was established at Northern to recognize unionists who have made an outstanding contribution to the cause of worker dignity and workplace fairness. If folks are at the Superior Dome, they can view the inducted labor leaders at the display case in the northwest section of the walkway.”

Seppanen's paternal grandparents were Finnish immigrants. His grandfather worked in the mines and died in a tragic underground mining accident, but his father ventured away from that career path and joined the Michigan State Police. The family moved often because of post transfers, with the last one bringing them to Negaunee. While his father encouraged Seppanen to join the Michigan State Police as well, he found his professional niche as an educator instead—mainly because of his experience at NMU.

“I loved all the classes, but I remember at one point, my adviser Jon Saari told me I needed to focus because I volleyed between philosophy, geography and other subjects. I found that I enjoyed activities that involved my being in front of the class. That came natural to me, so he said I may want to talk Dr. Gene Jones, who was responsible for all the history education students. The advice and help I received helped me find the career that I truly enjoyed. It worked out very well for me.” 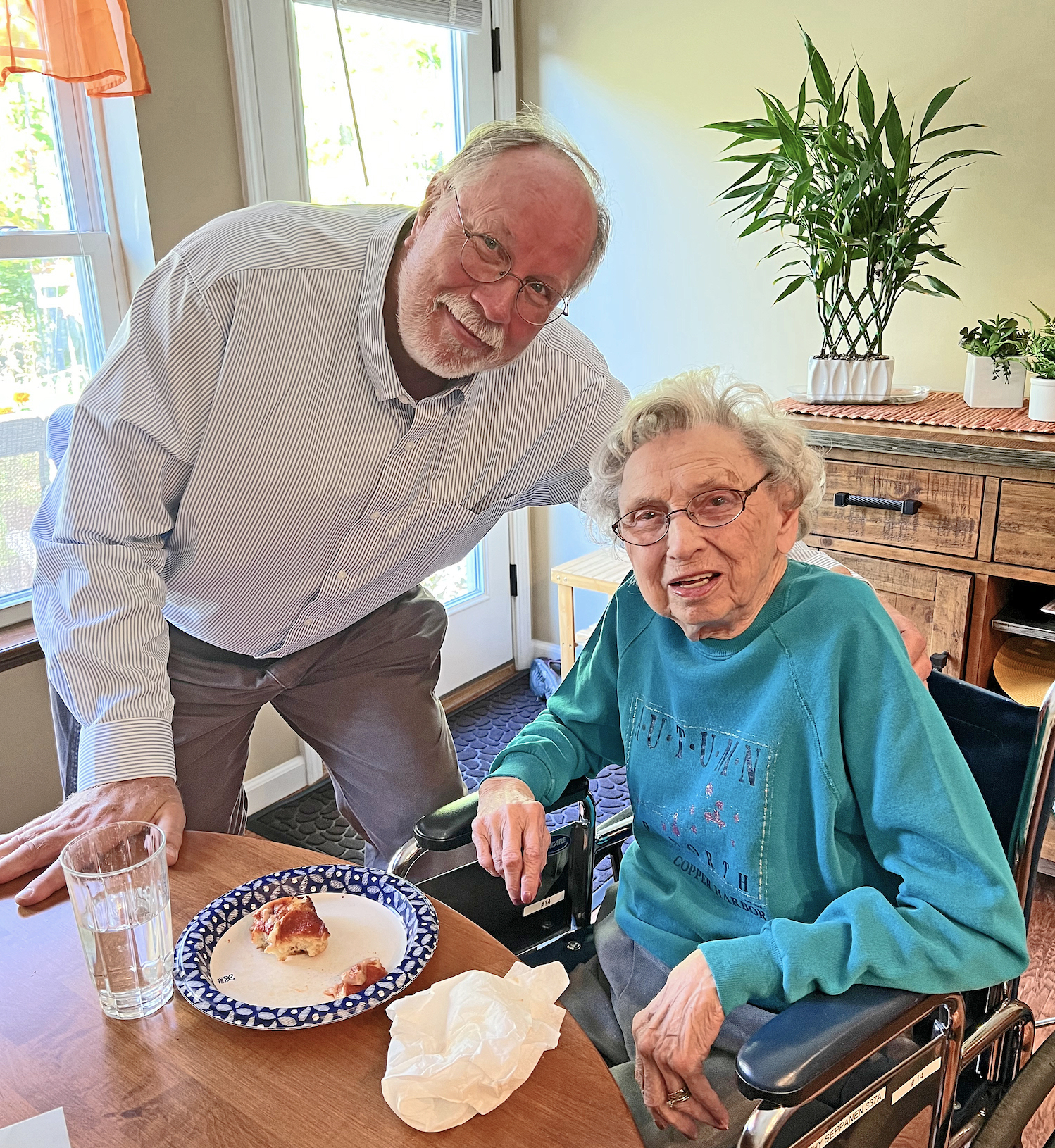 With his mother, Dorothy Seppanen, at her 96th birthday celebration. 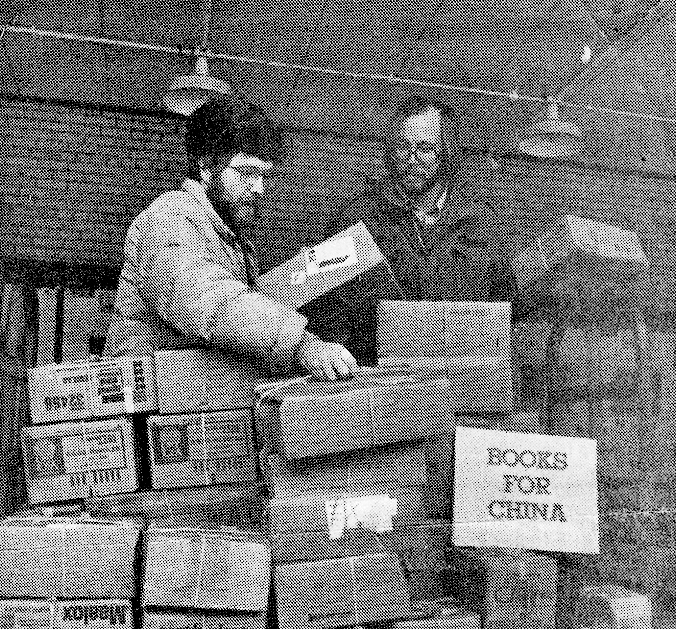 As a student, Seppanen (right) and his NMU adviser, Jon Saari, prepared a collection of books to ship to an English-language program in China.
Prepared By