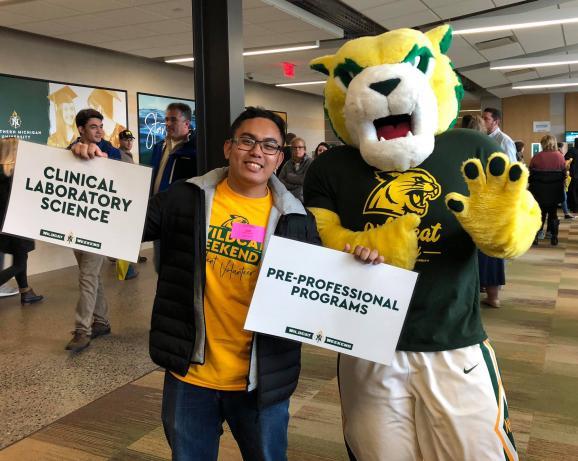 Josh Cahatol, from the Province of Bohol in the Philippines, is one of three students attending NMU this fall as a participant in the Global Undergraduate Exchange Program (UGRAD). The program is designed to increase students’ understanding of the United States and give them opportunities to take academic coursework and participate in other community activities.

The senior health sciences major was assigned to NMU through a scholarship by the U.S. Department of State, which enables students from other countries to experience U.S. higher education. Cahatol attends Ateneo de Manila University in Quezon City, Philippines.

His study of health sciences back home in the Philippines can be compared to a premedical program in the United States, with more of a focus on public health.

“I’m happy to be assigned to NMU because they have good health-related programs and facilities,” Cahatol said. “There’s this brain tumor center in West Science that I got to visit when a friend gave me a tour.”

Because he considers himself a lifelong learner, Cahatol said he finds it interesting to learn about how people think in different cultures.

“Studying abroad gives you access to actually learn about a culture from the people who are actually in the culture instead of learning it from books and movies,” he said. “Seeing it firsthand, you get to know people for who they really are and not from what other people tell you.”

Cahatol said he wants to learn things that he wouldn’t normally learn in his own country and hopefully also share some of his experiences from the Philippines with friends he has made at NMU.

“People here are generally polite,” he said. “Initially, I had this misconception of Americans to be rude, emotionally detached and those kind of things you get to see in media, but I’m happy to be dead wrong. It’s very nice to get to see what America is really like.”

Since coming to NMU, Cahatol has toured places like Michigan Technological University in Houghton and Pictured Rocks in Munising. He said he often enjoys outdoor activities like hiking and visiting Lake Superior. After returning home, he plans to attend medical school and eventually become a neurosurgeon.

“It’s a very enriching experience but I know I must go back to my country, be a doctor there and serve my fellow countrymen,” Cahatol said. “But in my brief stay here it’s been very positive.”

The International Education Services Office at NMU is collaborating with World Learning to bring students from other nations to campus for cultural exchanges.