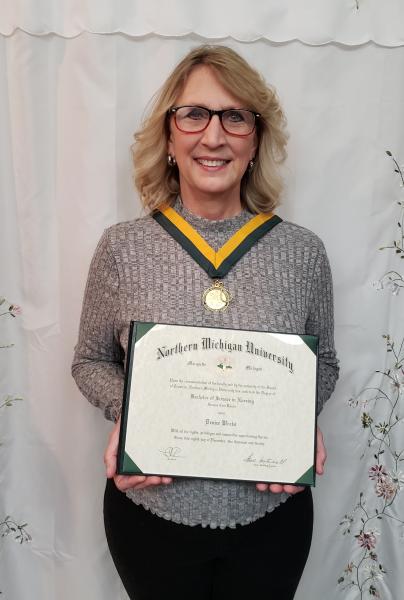 Denice Weeks of Boyne City, Mich., has been named one of two Northern Michigan University School of Nursing 2020-21 outstanding graduating seniors. With a 4.0 grade-point average, she graduated in December, earning her RN to BSN degree while simultaneously working full-time in the operating room at McLaren Northern Michigan.

Weeks was recognized with an NMU outstanding clinical performance award. She hopes to use her BSN degree to achieve a leadership role within her current nursing organization.

As the mother of two daughters who inspire her daily, Weeks volunteers as president of a horse rescue, helping to rescue, rehab and rehome horses. She also said that she enjoys spending time with her husband. Pat, collecting antiques and traveling to warm destinations.