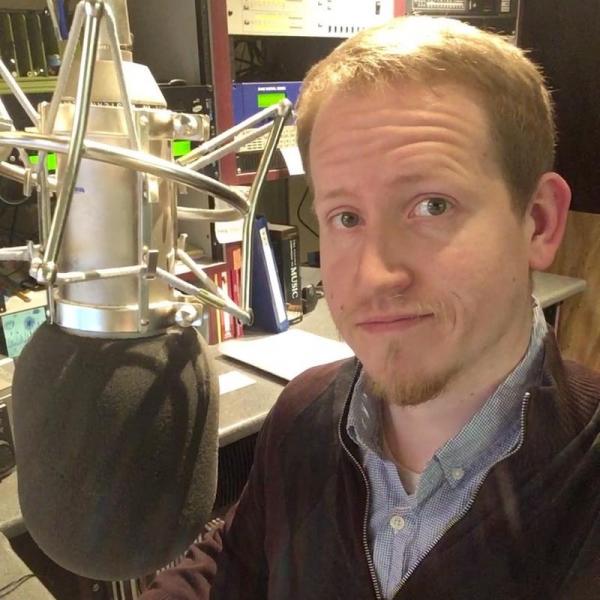 WNMU-FM producer and host Kurt Hauswirth recently won two Broadcast Excellence Awards from the Michigan Association of Broadcasters. “The Local Shuffle,” a special edition of “The Shuffle” new alternative music program that premiered on the station just last year, was recognized as best musical programming. An interview he conducted with poet Moheb Soliman about his “HOMES” release and reading in Marquette earned a merit award for special interest and cultural programming.

Hauswirth is also a Northern Michigan University alumnus. He earned a bachelor's degree in music education in 2009 and worked as a student board operator at Public Radio 90 as a student. He joined the station as a full-time employee in February 2017.

“I was shocked in the best possible way,” Hauswirth said in response to the best music programming award. “Ever since Covid changed our daily lives, we've all needed to do some adjusting and evolving. With that, I had an opportunity to start a new show on Public Radio 90 called ‘The Shuffle.' Making a new show during a tumultuous time took a lot of time, energy, and love, and to see that recognized by the Michigan Association of Broadcasters within a relatively short period of time was an honor.”

The regular show's format is new music presented by a host, with occasional music chats that are a blend of audio and video interviews. Hauswirth formatted “The Local Shuffle” special edition in a similar light, but devoted the entire program to local musicians as a feature during the October 2021 on-air fundraising period.

“The response to both the regular version of ‘The Shuffle' and the local editions has been wonderful,” he said. “We hear from listeners that it's become a part of their weekend listening habit and that they love discovering new musicians while also hearing local music featured on the airwaves. The station has also had increased support, from listeners who turn into donors, businesses that underwrite the program, and musicians themselves.”

Soliman contacted Public Radio 90 about covering his new book of poetry, “HOMES,” and his visit to Marquette. Hauswirth routinely conducts interviews related to arts and culture, so he coordinated a phone interview with the poet.

“This was the first time I had heard of him and his work, but his story was fascinating,” Hauswirth said. “Anyone who has visited any of the Great Lakes can attest to their beauty; Moheb had traveled the entire coastline of the Great Lakes twice. Speaking about his experiences both here in Michigan, along with his time in Egypt, made for a very engaging conversation about his sense of place, cultural relations, themes of nature and identity, and of course, the poetry which came from his experiences.”

WNMU-FM's awards fell within Public Radio Group I of the competition. Hauswirth said entries in a variety of categories are judged by a panel, with awards presented based on the size and budget of the station.