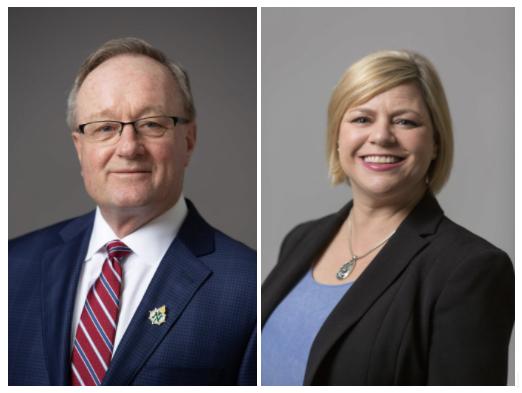 Steve Young of Lansing is the new chair of the Northern Michigan University Board of Trustees, effective Jan. 1. Alexis Hart of Royal Oak will serve as vice chair. The board held elections for the leadership positions at its Dec. 10 meeting.

“I'm very excited to take on this leadership role at Northern Michigan University, where I started my college career, and I thank my fellow trustees for their support and confidence,” Young said. “We have some important work in front of us. The search for a president is the single most important responsibility for a Board of Trustees. We've started getting the framework in place for a national search. I look forward to continuing my work with my fellow trustees as we seek to make NMU an even better place for our students, faculty, staff and extended Wildcat family.”

Young retired as owner and officer of the Lansing-based Governmental Consultant Services Inc. The top-rated lobby firm is one of the biggest in the state, and Young was voted the most effective lobbyist in Lansing for several years running. He previously served as a manager of tax and regulatory affairs for the Michigan Chamber of Commerce.

In the mid-1970s, Young was a political science major and Payne Hall resident at NMU. He left the university to work at the state capitol as chief of staff to a state senator from the Saginaw area. Young completed his bachelor's degree in political science and economics from Michigan State University. His term on the board expires Dec. 31, 2026.

Hart is Executive HR Director of Daimler Trucks North America  where she is responsible for the Culture, Leadership and Development departments. She also serves as the Executive HR Director for Daimler Truck Financial Services and Daimler International Assignment Services. Previously she served as Director of HR Shared Services for all divisions of the NAFTA organization with Daimler North America Corporation.

Hart earned a bachelor's degree in human resources from Michigan State University, and a master's in industrial and labor relations from Wayne State University. Her term on the board expires Dec. 31, 2024.

Trustees approved a recommendation from a campus work group to rename the Luther West Science building and phase out the use of “Hail, Northern,” the university's alma mater song written by West. The decision was based on information that recently came to light about the late biology professor's association with the national eugenics movement during the early 1900s.

NMU's naming policy for buildings states: “The university reserves the right to withdraw from a naming agreement if the name of an individual or organization, which has been bestowed upon a property, facility or program, comes into disrepute in the university or in the general community. When conflicts arise related to an existing name, the president will convene a group to consider any proposal to remove a name.”

The board also approved a special action item that will give NMU staff members a one-time payment equal to 2.5% of their salaries. Faculty received the same through their recently ratified contract.

“We wanted to extend this to the non-faculty groups who had not previously been identified to receive it, in appreciation for their outstanding work,” said Gavin Leach, vice president for Finance and Administration.

In other action, the board:

-Agreed to proceed with the following previously approved capital and long-term maintenance investments: Northern Center changes to accommodate the hospitality management and cosmetology programs, $4.5 million; a new Health and Wellness Center, $6.5 million; a new location for the Behavior Education Assessment and Research (BEAR) Center, $1.2 million; and the demolition of West Hall, $1.2 million.

-Approved updates to the board's bylaws to reflect changes in technology or processes, or to become more efficient. Also amended language in four university policies to provide alternate paths for reporting complaints of harassment, discrimination, retaliation and sexual misconduct.

-Approved a donation of 18 Inuit prints from Rachel Crary through the NMU Foundation for the DeVos Art Museum's permanent collection.

Incoming Chair Steve Young appointed board the following standing committee memberships for calendar year 2022. There will be additional appointments pending the governor's addition to the board to fill a vacancy. Finance: Chair Robert Mahaney, with Alexis Hart and Greg Seppanen; Academic Affairs: Lisa Fittante, chair, and Tami Seavoy; Extended Learning and Community Engagement: Chair Alexis Hart, Jason Morgan and Seavoy; Ad Hoc Policy Review: Chaired by Seavoy, with Morgan and Fittante; External Partnerships: Chaired by Mahaney, with Seppanen; Recruitment and Retention: Chaired by Morgan, with Seppanen; and Liaisons to the NMU Foundation: Morgan and Hart.

Trustees also recognized outgoing trustee Donna Murray-Brown, who is resigning before her term expires because she is moving out of state, and outgoing chair Tami Seavoy of Marquette, who will remain on the board through Dec. 31, 2022.