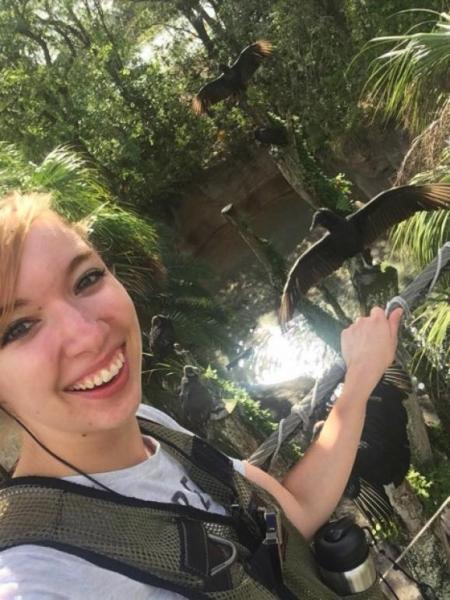 Persoon during an internship at Disney's Animal Kingdom

NMU senior Abby Persoon has found a unique way to combine her zoology major with her theater minor by matching different bird species to each of the principle characters in the Forest Roberts Theatre (FRT) production of Sweeney Todd.

Persoon worked closely with FRT director Keli Truckey to base each character on a bird to capture an underlying theme of bird imagery that most people aren’t aware is included in the play.

“Keli gave some direction, like ‘I want Sweeney to be a bird of prey,’ or ‘I see the Beadle as a vulture,’” Persoon said. “Once I had a little direction about what she was looking for, I dove deep into both the behaviors and the European mythology behind the birds. For example, Mrs. Lovett’s character is based on a Silkie Chicken. We chose that breed specifically because, unlike other chickens, Silkies have black muscles, organs and skin. In other words, they’re black all the way through, just like Mrs. Lovett.

“Once we determined different birds for each character, the actors were able to incorporate some of the movements and other behaviors in their characters. Keli wanted to be sure that there was the idea of the bird there, but also that the actors weren’t actually playing a bird. If you watch Paul Truckey, who plays Sweeney Todd, he will have claw-like hands or very focused stares. This is because his character is based on a White-Tailed Eagle, a bird similar to the Bald Eagles we see here in the United States.”

The ensemble also uses birds as inspiration. All members have birds based on their individual characters, but they also work as a “flock,” Persoon said.

“There are moments in the show where you can see the ensemble imitate songbirds forming a flock or watching the audience like vultures watching their meal from a tree. They also use some bird noises during a few of the scenes, so keep your ears open.”

Sweeney Todd’s music is filled with bird influences, from Johanna’s song, “Green Finch and Linnet Bird” to the orchestrations, Persoon said. There is also a lot of imagery of caged birds in the show, including Johanna trapped in Judge Turpin’s house and the Birdseller with her many birds. The bird theme also extends to costume and set design, as well as props.

Persoon started by looking at different birds that are native to London, the setting for the play. After making a list, she talked with Truckey about what the FRT wanted for each character. She also helped with the inspiration for costume designs in the show. Audience members will notice feather patterns of birds in the costumes, which also feature a steampunk theme.

Currently, Persoon works with biology professor Alec Lindsay in the NMU Zoology Museum where she focuses on the preparation and preservation of museum specimens.

“I prepare avian specimens that come in to the museum to be used in research all over the world. I have also studied abroad in Zambia, where I did research on conservation statuses of birds that we saw in three different national parks,” she said.

Persoon said she chose a zoology major with a minor in theater because she has always loved animals and theatre.

“Before this project, the most crossover I had of my major and minor was doing presentations at the different zoos I worked at,” she added. “Because of my work in Dr. Lindsay’s lab and my travels to Zambia and London, I was able to help [with Sweeney Todd].”