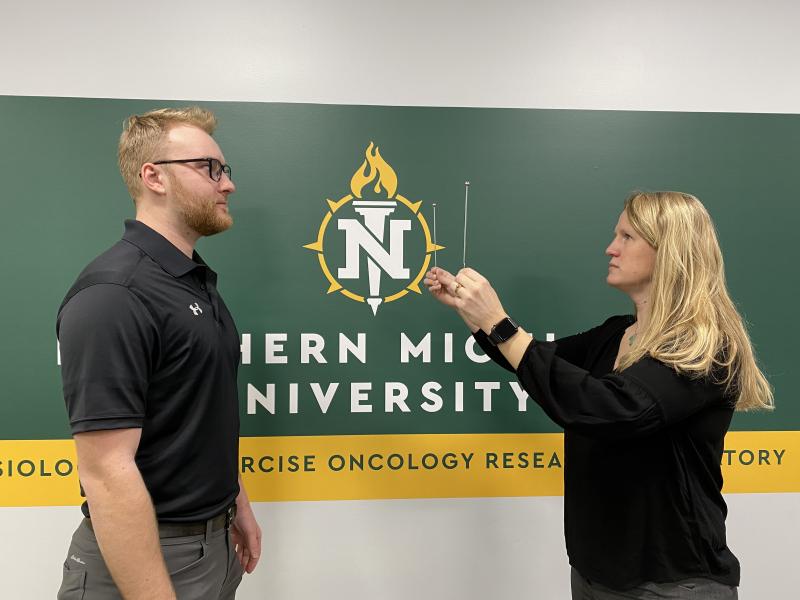 Protocols for diagnosing and treating concussions have improved significantly through enhanced education and training, expanded academic research, and more sophisticated technology tools. Maggy Moore of NMU's School of Health and Human Performance is dedicating more time to all of the above as the first five-year recipient of the Mark. R. and Eileen Lovell Endowed Professorship.

Moore is exploring new research directions and interdisciplinary collaborations. She is also looking forward to the post-pandemic operation of the new NMU Concussion Research Clinic.

The professorship was established in 2019 with a $1 million gift from alumnus Mark Lovell ('77 BS) to support education, research and patient care related to concussions. Now retired, he is an internationally recognized concussion expert and developed the ImPACT Test, the first and most scientifically validated computerized concussion evaluation system.

With assistance from students, Moore has been collecting DEXA scan data on both skull density, for which she said there has been no previous research, and anthropometrics, which assess the body's composition of muscle, bone and fat. The data will help to determine how concussion relates to different body information.

“People have looked at head and neck strength, but not skull density,” she said. “We've heard the adage, ‘Don't worry, he has a thick skull.' We're trying to see if there's any truth to that. We're also looking at athletes who use sticks in their sports, like lacrosse and hockey, to see how that relates to concussions. There's been some research on anthropometrics, but not necessary on the left-to-right differential associated with stick sports, compared with something like soccer, which is up and down.”

On a related note, Moore and Cole Sing, an exercise science May graduate, compared how DEXA full-body anthropometric data compares to the cheaper and less invasive caliper “pinch test” measurements on seven parts of the body. It was Sing's NMU Honors Program capstone project.

Moore is also collaborating with functional neurologist Dr. Christa Hubbard on Phase II of a study to complete baseline tests of sideline assessments used to diagnose concussions. They are looking at coordination between eye and hand movements, as well as gait and head movement.

“We also add in cognitive tests, such as reciting months of the year backward or skipping every other month,” Moore said. “Everyone should be able to do that. The goal is to make it easier to properly diagnose concussions, even in rural areas, where there might not be a qualified person available to determine whether an athlete can play or not. This helps athletes recognize when they can't do simple tasks. They're well aware they're not okay and I've seen some people break down because they can't' do things that would normally come easy for them.”

Post-concussion research and services will be based at the NMU clinic, located in space occupied by the School of Health and Human Performance in the Great Lakes Sports Medicine Institute on Washington Street in Marquette. The institute addresses injury, rehabilitation and wellness needs.

Athletic training students will be placed at the clinic because Moore said they know what rehab is required post-concussion. They will be paired up with students from NMU's Behavior Education Assessment and Research (BEAR) Center and the speech pathology lab in the Clinical Lab Sciences Department. Moore said that by gaining an understanding what each does and how they might collaborate, the students will be better positioned to help post-concussion individuals—not only competitive athletes—reintegrate into their activities and work with greater functionality.

“Some people post-concussion might assume that's just how they're going to be from now on, but that's not true. They can get back to normal instead of accepting sub-par as normal,” Moore said. “As a parent, I see so frequently other parents not knowing what to do if their child has a concussion. They don't know where to go to start the process and sometimes family doctors don't, either. We're hoping to get them started at the clinic and refer them to the right place if they're in post-concussion syndrome and their symptoms are lasting beyond the normal recovery period of a couple weeks.”

Moore said she is working hard to involve some of the amazing practitioners in the area who have expertise or interest in concussions to provide an optimal support system through the clinic. 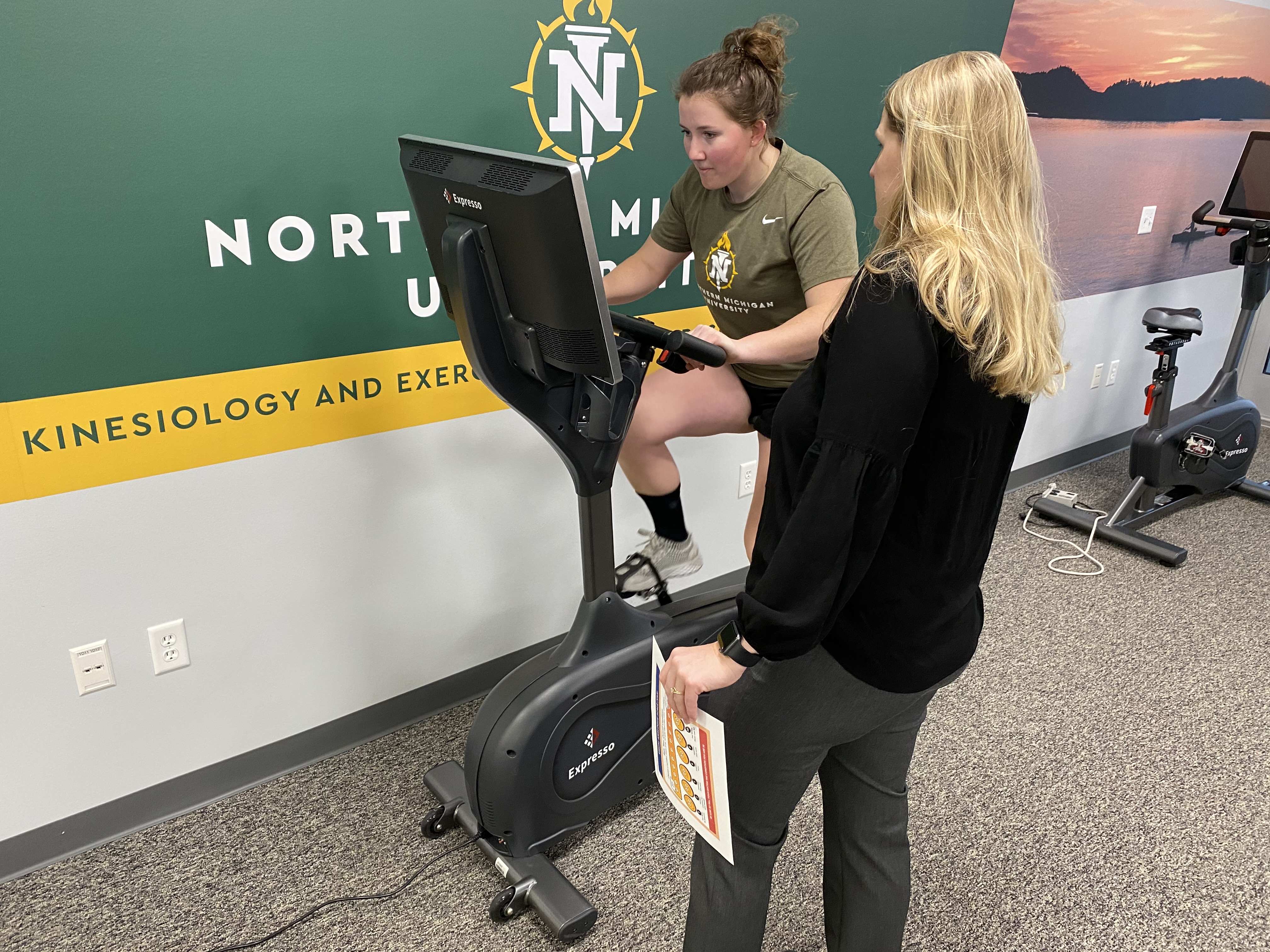 Moore with Brett Fox on a bike tasking the cardiovascular system and vision system with a bit of balance. 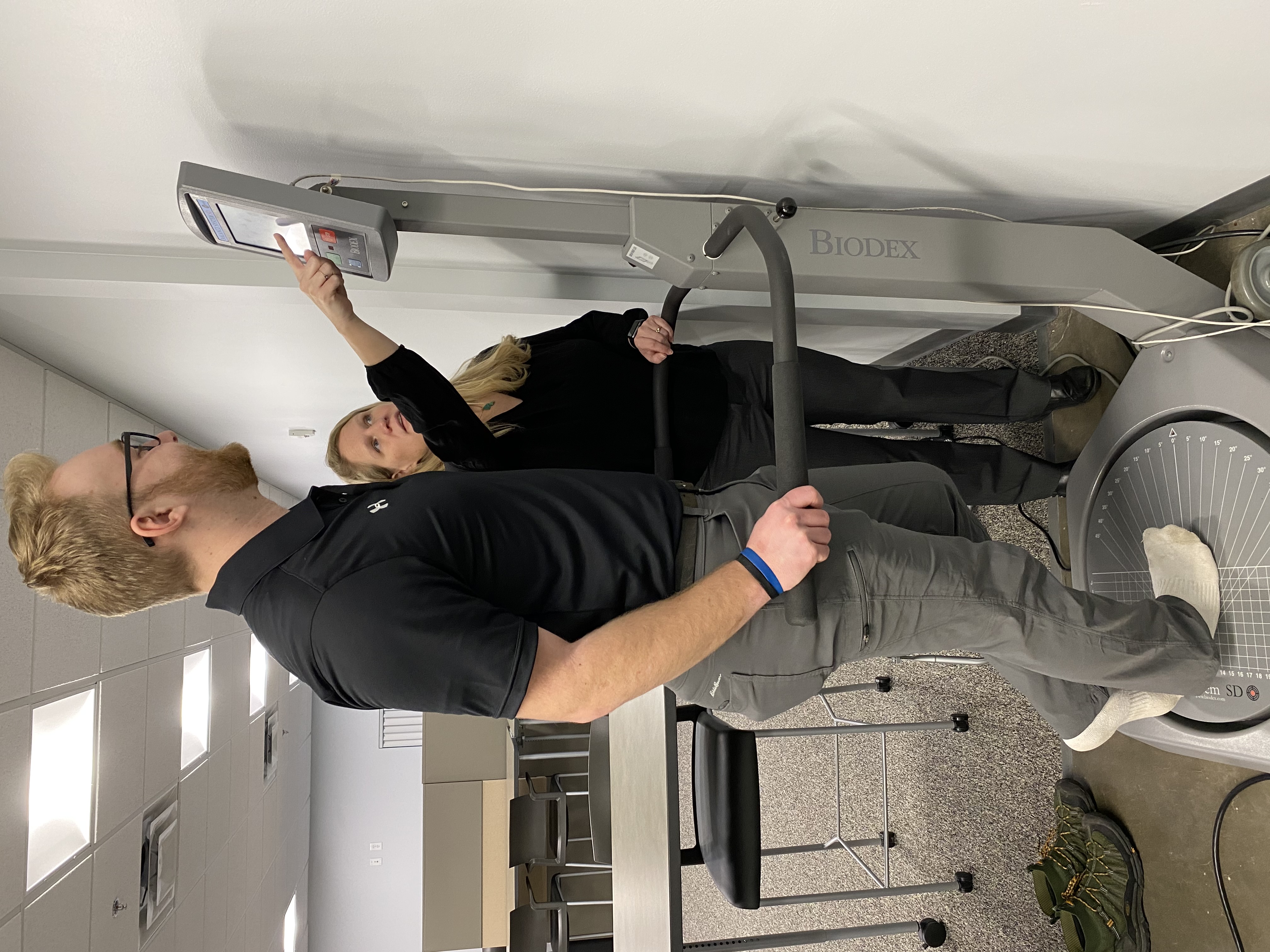 Moore watches Owen Mills on the Biodex Balance System, which allows for dual tasking with vision and balance.
Prepared By