Father and Daughter Both ASNMU Presidents 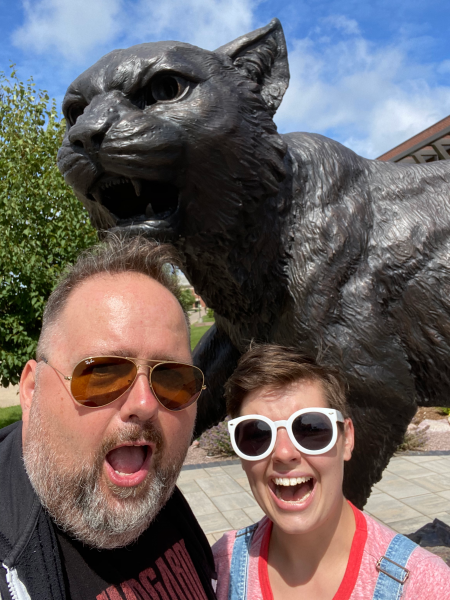 “When I told my dad I was considering running for president, he said ‘That's great. I believe in you no matter what you do,'” said Emma Drever. “There was no pressure to run for the position. He supported my choice no matter what.”

During her time on ASNMU, she has created two committees to bring voter mental health awareness and voter registration initiatives to campus. As part of the latter, she helped to establish NMU's satellite city clerk's office in advance of the Nov. 3 election (read more here).

“It is really important that the world ends mental health stigmas and that mental health care is something we take pride in,” said Emma Drever. “The culture surrounding mental health topics at NMU has definitely changed since I have been here. I helped to develop Mind Your Health, a mental health awareness committee on campus. We also now have 24-hour access to crisis counseling.

"The provost asked ASNMU to work on voting advocacy projects back in January. While working at registration and information tables back then, I fell in love with that work. It should be ingrained in the DNA of student government to encourage participation in government and in voting. Historically, young people are the most underrepresented in polls, yet it is so important for young people to vote on every level. There are so many resources out there, and I try to be a source of information for our campus community.”

Peter Drever works as an attorney. He said the ASNMU board was diverse in terms of gender, ethnicity and geography while he was president, and that those who comprised it felt empowered to act to improve the overall student experience at NMU.

“I recall one of the representatives beginning or expanding upon a campus recycling program to great effect,” he said. “This was rather cutting edge back in the day. We also worked to register students to vote, but that pales in comparison to Emma's current efforts. I have been incredibly proud of Emma her entire life. She is a smart, dedicated and driven woman. It must have been strange to conduct a campaign in the midst of a pandemic. She takes her work in the office very seriously.”

Emma Drever was recently involved in an ASNMU collaboration with the Native American Student Association to establish the recognition of Indigenous Peoples' Day on campus.

“Being involved in ASNMU has really awakened my passion for advocacy,” she said. “Actually getting to act on a policy while interacting with students has been very meaningful and is my favorite part of my position.”

During his time at NMU, Peter Drever was active in hall and house government on campus and was a resident assistant and summer orientation staff member before running for ASNMU office. He also served as an off-campus representative following his tenure as ASNMU president. Since graduation, he has served on the NMU Alumni Association board of directors.

“I think student government is a great context to realize a target or objective and to find ways to work in a community to effectuate or accomplish same,” said Peter Drever. “I think many of the answers to the questions we face as a society are community-based. Think global. Act local.”

Being a Wildcat runs in the Drever family. Niki Drever ('95 BS), Peter's wife and Emma's mother, is a current Alumni Association board member. Peter's mother Julianne Drever ('90 BSN) earned her nursing degree at NMU as well.

Upon earning her bachelor's degrees in English and Spanish, Emma Drever is planning to pursue graduate school and said that she will incorporate her love of advocacy into her future endeavors.

According to the ASNMU website, the president is the official head of NMU student government and speaks on behalf of the organization. They are an advocate for the students' voice and are tasked with signing or vetoing general assembly legislation, presenting updates to the NMU Board of Trustees and calling special sessions of the assembly. The president is also a full voting member of NMU's President's Council.