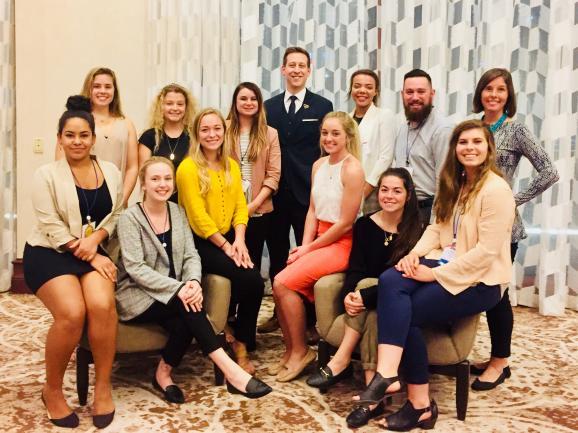 “When Jonathan Mildenhall walked out on stage I instantly had chills; he was responsible for Airbnb's successful campaigns for the past five years,” said Sarah Schollmeyer, senior at NMU. “His presentation was on the ‘Power of Purpose,’ pertaining to his purpose in life and in his job. When he moved on to Airbnb, people thought he was crazy—that they were just an overnight success—but he eventually made a small budget stretch and created amazing campaigns. When he explained that his personal goals for equity, equality, creativity and humanity were present at companies he worked for, I knew I was in the right field. I was obtaining the right degree and I chose the right school.”

While in Austin, students met with several NMU alumni, including Brian Price, former national PRSSA president. Price is corporate communications manager for Starwood Retail Partners, a retail real estate company that manages 30 shopping centers across the U.S. He directs all public relations and digital marketing efforts. Students were given a new perspective on career opportunities and where the communications field can lead.

“Attending this conference opened my eyes more than I could have imagined,” said NMU student Molly Gaudreau. “Before the conference, I had a general understanding of what Public Relations was, but it wasn’t clear. Now, seeing the PR professionals that were in front of me, talking about all the different things they do and the avenues they have been down, I came back to school motivated, hopeful and so excited. I went to Austin thinking I was set on sports PR. Now, I have a strong interest in crisis communications and management. PRSSA is a life-changing pre-professional society and I am excited and honored to be a part of something such as this.”

“I was delighted to attend the conference with such a professional and polite team of students,” Thompson. “[The students] were attentive, engaged and showed endless enthusiasm for this dynamic learning opportunity.”