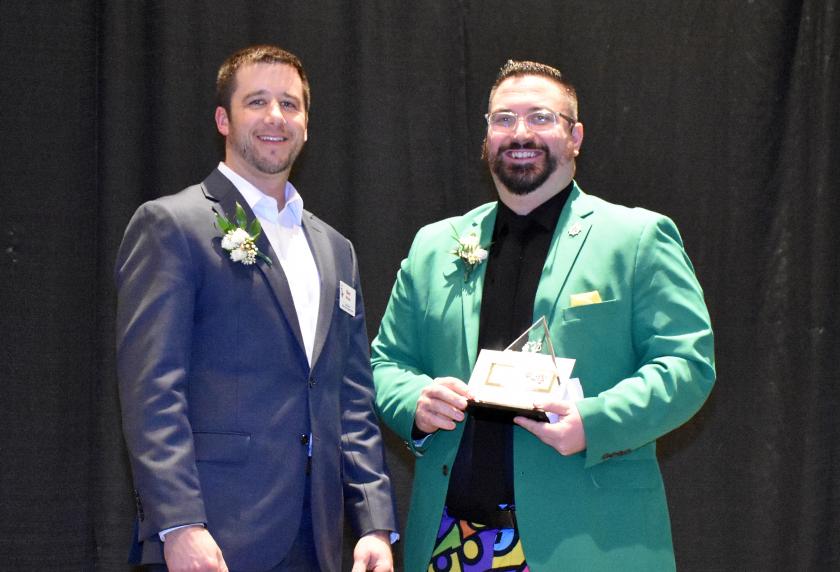 Digneit (right) with his award

Northern Michigan University director of theater William Digneit received the Dr. Dawn Gallup Honor Recipient Award on March 5 from the Michigan Council for Exceptional Children. Digneit was honored for his efforts to create sensory-friendly productions of shows produced by the NMU Theatre and Dance department in partnership with the Theatre Development Fund (TDF) in New York City.

The goal of the "Theater for All" concept is to modify performances for children and adults who are on the autism spectrum or have sensory issues, yet preserve the entertainment value of the show. This allows families to enjoy productions together while also creating a supportive environment.

TDF launched the initiative in 2011 with Disney's landmark musical The Lion King, the first autism-friendly performance of a Broadway show. NMU's first Theater for All performance was the February 2018 musical, Tarzan. The concept has continued for other NMU productions.

“When I found out I was receiving this award, I was speechless,” said Digneit, who was honored during the council's conference in Grand Rapids. “I feel humbled, truly honored and grateful that the efforts that the community, campus and students are doing is being recognized. And I'm just really proud that the work we're doing is having a positive impact on so many people.

"While I feel lucky to be receiving an award, I feel like it takes a team to accomplish what we've done. I may be the one receiving the award, but I'll be representing so many important players in the NMU Theatre and Dance department when I get it.”

The Michigan Council for Exceptional Children is an organization whose mission is to strengthen the field of education to impact success for individuals with exceptionalities by providing professional development, support and advocacy for children, youth, families, special and general educators.