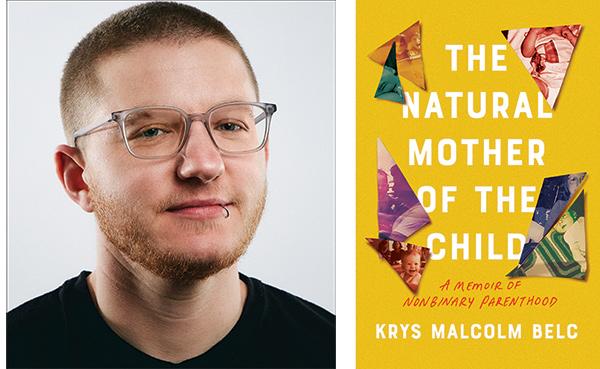 Belc and his book cover

Northern Michigan University MFA alumnus Krys Malcolm Belc was interviewed by Publishers Weekly about his forthcoming book, The Natural Mother of the Child. The title comes from the legal designation assigned to Belc—a nonbinary, transmasculine parent—after he gave birth to his son, Samson.

The book is described as journeying both toward and through common perceptions of what it means to have a body and how that body can influence the perception of a family.

“The things that I write about—a lot of it is these mundane parenting things—have very broad appeal,” he told Publishers Weekly. “I feel like there's a separation of queer and trans writing from the family life. The default expertise of what it means to be a parent to young children seems to be [that of] a white, middle-class woman. I'm a parent who is not a mom, and not in the fatherhood realm, but somewhere in between those things.

“It's challenging to explore the boundaries between these binary ideas of parenting, but there's room for people who are pushing against the boundaries a little bit. The image of the transgender dad as more than just a theoretical thing makes a lot of people really angry. I like the idea that my book would challenge people about who gets to participate in these conversations.”